Information about Michael A. Cummings 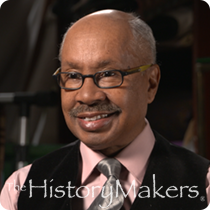 See how Michael A. Cummings is related to other HistoryMakers

Visual artist Michael A. Cummings was born on November 28, 1945 in Los Angeles, California to Arthur Cummings and Dorothy Dent. Cummings graduated from John C. Fremont Senior High School in Los Angeles in 1963. While Cummings attended Los Angeles City College for business administration from 1963 to 1966, and Woodbury College for design from 1968 to 1969, he earned his B.A. degree in art history from SUNY-Empire State College in 1979. Before graduating, Cummings enrolled in the New School for Social Research in 1973, completing the Workshop in African Arts and Crafts program at The American Museum of Natural History in 1976.

Cummings began his career in 1972 as a technical director for the New York Department of Cultural Affairs. In his spare time, he worked as a collage artist and painter. He discovered his passion for quilting after creating a cloth banner for an exhibition in 1973. He taught himself to quilt by studying the works of local quilters and how-to quilt books. In 1974, Cummings became the purchasing manager assistant for The American Museum of Natural History. He served as an arts administration assistant for The Children’s Art Carnival in 1976; and that same year, held his first solo exhibition at the Studio Museum of Harlem. Cummings was the artist-in-residence for the New York Foundation for the Arts from 1977 to 1979, and joined the New York State Council on the Arts as an arts program analyst in 1980, working in contract administration. Cummings’ solo exhibitions showed at the Francine Seders Gallery (1992), the Akron Art Museum (1993), Bates College (1998), Nobis Gallery (2007), the International Quilt Festival in Japan (2011), and the Artquilt Gallery (2014).

Cummings quilt work, which adheres to the narrative, story-telling tradition, has been commissioned by the American Embassy Art program, the City of Knoxville, Tennessee, the New York Department of Cultural Affairs, Home Box Office (HBO), The White House, and the House of Seagram, among others. His work was also included in the public collections at the Brooklyn Museum, the Museum of Art and Design, the California African American Museum, the Schomburg Center for Research in Black Culture, the Smithsonian’s Renwick Gallery in Washington, D.C., and in the private collections of stars like George C. Wolfe, Whoopi Goldberg, and Alonzo and Tracy Mourning.

Cummings received the 2001 Louis Comfort Tiffany Biennial Award, the 2001 Excellence in Design Award from the City of New York City Art Commission, and the 2001 Children’s Book of Distinction award from the Riverbank Review. He was interviewed for the Smithsonian Archives of American Art in 2012, and by the ART CART: SAVING THE LEGACY project at The Research Center for Arts and Culture, an affiliate of The Actor’s Fund, in 2013.

Michael A. Cummings was interviewed by The HistoryMakers on November 9, 2016.

See how Michael A. Cummings is related to other HistoryMakers
Click Here To Explore The Archive Today!