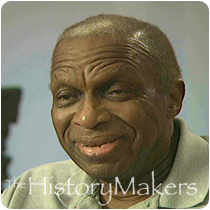 See how Merton Simpson is related to other HistoryMakers
Donate Now

Painter Merton Daniel Simpson was born on September 20, 1928 in Charleston, South Carolina to Jenny and Marion Simpson. He began drawing after being hospitalized at childhood with diphtheria. William Halsey, an artist who gave private instruction to the young artist, soon recognized Simpson’s talents. During his formative years, Simpson worked at the Gibbes Museum there he was the only African American in the still segregated institution.

Moving to New York in 1942, Simpson began his studies at Cooper Union Art School and also at New York University where he studied with professor Hale Woodruff. In 1951, he joined the U.S. Air Force, where he was the official U.S. Air Force artist and painted portraits of officers including one of General Dwight D. Eisenhower. In 1952, his painting, "Nocturnal City" was exhibited at the Metropolitan Museum of Art. Concluding his military service in 1954, Simpson returned to New York to continue painting and was included in two museum exhibitions, Young American Painters at the Guggenheim Museum in 1954 and Eight New York Painters at the University of Michigan in 1956.

In 1954, Simpson opened a gallery on Madison Avenue, which featured African and Modern art. During the Civil Rights Movement in 1963, Simpson joined the Spiral Group, an organization of African American artists that included Romare Bearden, Norman Lewis, and Charles Alston. For Simpson, this sense of social consciousness led to his "Confrontation" series, a group of mostly black and white canvases, which expressed the anger, and frustration of the times.

Traveling extensively to West Africa in the 1970s, Simpson built a collection of African art and is known as one the preeminent dealers of African art. In the 1980s, he created two series of work, "Universal Orchestrations" and "Contemporary Melodies" both showed his great love for jazz music. By the 1990s, Simpson began using fragments from West African hunting cloth, which were used to wrap tribal objects during shipments from Africa. His work gained a sculptural quality reflective of tribal art. In 1995, the Gibbes Museum of Art in Charleston presented a retrospective exhibition and published a catalogue entitled, "Merton D. Simpson, The Journey of an Artist." The Studio Museum in Harlem honored Simpson in 2002 for his work as an artist and humanitarian.

Merton Daniel Simpson was interviewed by The HistoryMakers on November 29, 2005.

See how Merton Simpson is related to other HistoryMakers
Donate Now
Click Here To Explore The Archive Today!