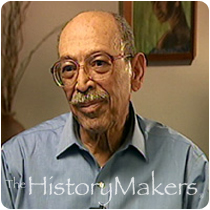 See how Mercer Cook is related to other HistoryMakers

Mercer Cook, born May 31, 1930 in Washington, D.C., is an accomplished attorney in public and private practice with an interesting family story. His great grandfather John Hartwell Cook graduated from Oberlin College during the Civil War and was reportedly the first Dean of Howard University Law School. His grandfather, classically trained composer Will Marion (Mercer) Cook (1869-1945) collaborated on Broadway musicals with Paul Laurence Dunbar and Bert Williams. His father, (Will) Mercer Cook (1903-1987) was a noted scholar and translator from Howard University who served as United States Ambassador to Senegal and Nigeria.

Cook grew up in Atlanta, attending Oglethorpe Elementary School. He graduated from Dunbar High School in Washington D.C. in 1947. Cook earned a B.A. from Amherst College in 1951. He spent some time in Europe before returning to finish his J.D. from the University of Chicago in 1956. Cook’s brother, Jacques is also an attorney. From 1957, he was in private practice. In 1967, he was hired by the Cook (Illinois) County Legal Assistance Foundation. In 1970, Cook switched to the Cook County State’s Attorney’s Office. He was Assistant State’s Attorney from 1970 to1989 and Deputy State’s Attorney from 1989-1993. From 1993 to 1996 Cook worked for the legal firm Gordon and Pikarski. He has remained in private practice since 1996.

See how Mercer Cook is related to other HistoryMakers
Click Here To Explore The Archive Today!