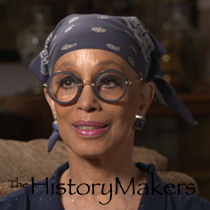 See how Mercedes Ellington is related to other HistoryMakers

Dancer and choreographer Mercedes Ellington was born on February 9, 1939 in New York City to Ruth Silas Batts and trumpet player and conductor Mercer Ellington, son of renowned composer and bandleader Duke Ellington. Ellington was raised by her maternal grandparents Louise Petgrave Silas and Alfred Silas, who enrolled her in dance and ballet classes at an early age. Ellington received a scholarship to attend The Metropolitan Opera School of Ballet, but decided to enroll at The Julliard School at her father’s insistence. She graduated with her B.A. degree in classical and modern dance in 1960.

Ellington’s first professional role was in a production of West Side Story in Australia. She also appeared in productions of On the Town and Pal Joey at the New York City Center. In 1963, Ellington became the first African American member of the June Taylor Dancers, the featured performers on The Jackie Gleason Show. She danced with the June Taylor Dancers for seven years, until she moved on to perform in Broadway shows like No, No Nannette, The Night That Made America Famous, The Grand Tour, and Happy New Year. In 1981, Ellington starred in Sophisticated Ladies alongside her father, who conducted the Duke Ellington Orchestra. In 1983, she co-founded BalleTap, later named DancEllington, with Maurice Hines. Ellington produced award-winning choreography in musicals such as Blues in the Night, Juba, Satchmo and Tuxedo Junction. The organization dissolved in 1992, and Ellington went on to direct the Broadway Cares/Equity Fights AIDS Tribute to the Spirit of Harlem in 2001. In 2004, Ellington founded Duke Ellington Center for the Arts, a non-profit organization dedicated to scholarship, education, and performance connected to the legacy of Duke Ellington.

Ellington’s choreography and commitment to her grandfather’s legacy earned her numerous honors and awards, including the Actor’s Equity Association’s Paul Robeson Award and the FloBert Lifetime Achievement Award. She also served as a judge for the Capezio Dance Awards, and as a member of the Screen Actors’ Guild and the American Tap Dance Foundation. In addition, Ellington served on the local and national boards of the American Federation of Television and Radio Artists. In 2016, she also co-authored a book entitled Duke Ellington: An American Composer and Icon with Stephen Brower.

Mercedes Ellington was interviewed by The History Makers on August 12, 2016.

See how Mercedes Ellington is related to other HistoryMakers
Click Here To Explore The Archive Today!