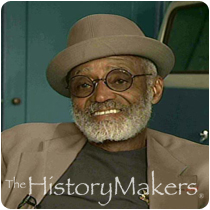 Filmmaker, author, and actor Melvin Van Peebles was born on August 21, 1932, in Chicago, Illinois. Growing up during World War II, he spent his adolescence with his father, a tailor. Van Peebles graduated from Township High School in Phoenix, Illinois, in 1949 and spent a year at West Virginia State College before transferring to Ohio Wesleyan University where he earned his B.A. degree in English literature in 1953.

During the late 1950s, Van Peebles served three and a half years as a flight navigator in the United States Air Force. After the military, he lived briefly in Mexico and San Francisco where he wrote his first book, The Big Heart, which was about the life of San Francisco’s cable cars and their drivers. Moving to the Netherlands, he studied at the Dutch National Theatre before moving to France in the early 1960s. During this time, Van Peebles wrote several published novels in French, including La Permission in 1967. He filmed this story under the title, The Story of the Three-Day Pass, and it was selected as the French entry in the 1968 San Francisco Film Festival. It earned critical acclaim, which helped him obtain a studio contract with Columbia Pictures. In 1969, Van Peebles returned to the U.S. to direct and score his first Hollywood film Watermelon Man. The film was released in 1970, followed by his independent feature Sweet Sweetback’s Baadasssss Song, probably his best known work. Some of his other films include Don’t Play Us Cheap in 1973, Identity Crisis in 1989, Gang in Blue in 1996 and Le Conte du ventre plein in 2000.

As a playwright and composer, Van Peebles wrote two Broadway hit plays: Ain’t Supposed to Die a Natural Death in 1971 and Don’t Play Us Cheap in 1972, for which he earned a Tony Award nomination. As an actor, Van Peebles has appeared in several films including Robert Altman’s O.C. and Stiggs in 1987 and Mario Van Peebles’ Panther in 1995, which he also wrote and co-produced. In 2005, Van Peebles was the subject of a documentary entitled How to Eat Your Watermelon in White Company (and Enjoy It). He has been honored with numerous awards, including a Grammy and a Drama Desk Award. He received the Children’s Live-Action Humanitas Prize for The Day They Came to Arrest the Book in 1987, and in 1999, he was awarded the Chicago Underground Film Festival’s Lifetime Achievement Award.

See how Melvin Van Peebles is related to other HistoryMakers
Donate Now
Click Here To Explore The Archive Today!