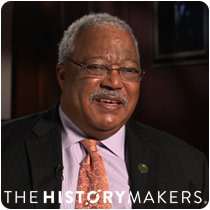 Favorite Color:
Crimson and Cream
Favorite Food:
Fried Chicken
Favorite Time of Year:
Fall
Favorite Vacation Spot:
Relaxing Places
Favorite Quote:
You Have To Be Where Your Ship Comes In

Favorite Color:
Crimson and Cream
Favorite Food:
Fried Chicken
Favorite Time of Year:
Fall
Favorite Vacation Spot:
Relaxing Places
Favorite Quote:
You Have To Be Where Your Ship Comes In

See how Melvin Stith is related to other HistoryMakers

Academic administrator Melvin Stith was born on August 11, 1946 in Portsmouth, Virginia to Florence Stith and Millard Stith. Stith graduated from Central High School in 1964, and earned his B.S. degree in sociology from Norfolk State University in 1968. Stith then received his M.B.A. degree in 1973 and his Ph.D. degree in marketing in 1978, both from the Martin J. Whitman School of Management at Syracuse University. Stith served in the U.S. Army Military Intelligence Command from 1968 to 1972, achieving the rank of captain.

From 1977 to 1982, Stith worked as an assistant professor of business and an associate dean at the University of South Florida College of Business. He then served as a visiting professor at the Florida A&M University School of Business and Industry from 1982 to 1985, when he accepted an associate professor position in the marketing department at Florida State University, later serving as the department’s chair. In 1991, Stith was named dean of the business school and Jim Moran Professor of Business Administration. He left Florida State University in 2005 to become the dean of the Martin J. Whitman School of Management at Syracuse University. Stith also served on a number of boards, including Aflac, Flowers Food Corporation, the Keebler Food Company, and the Tallahassee State Bank. He served as president of the Crouse Hospital Foundation, an independent director at Synovus Financial Corporation, and an advisory board member of Syracuse University’s Institute for Veterans and Military Families. In 2018, Stith was appointed interim president of Norfolk State University.

Stith has received numerous awards over the course of his career. In 1990, he won Florida State University’s Dr. MLK Jr.’s Distinguished Service Award; and in 2018, he was inducted into the Florida State University College of Business Faculty Hall of Fame. His Ph.D. thesis became part of the Ph.D. Project Hall of Fame in 2014. He was a recipient of the Syracuse University Orange Circle Award, and is a member of the Lyman Beecher Brooks Society at Norfolk State University. Stith was named as a top influential black corporate executive by Savoy Magazine in 2016 and 2017.

Melvin Stith was interviewed by The HistoryMakers on January 16, 2018.

See how Melvin Stith is related to other HistoryMakers