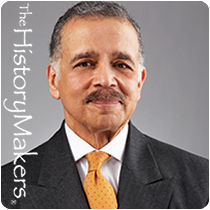 Favorite Time of Year:
Fall
Favorite Quote:
God Dwells Within You As You.

Favorite Time of Year:
Fall
Favorite Quote:
God Dwells Within You As You.

See how Melvin Miller is related to other HistoryMakers
Donate Now

Newspaper publisher and editor Melvin B. Miller was born on July 22, 1934 in Boston, Massachusetts. Miller grew up in Boston’s middle-class Roxbury neighborhood and graduated from Boston Latin School. He then enrolled at Harvard College and graduated from there in 1956 with his A.B. degree. Following a six month stint as an executive trainee at Aetna Insurance in Hartford, Connecticut, Miller was drafted and served for two years in the U.S. Army. He went on to enroll at Columbia University Law School and earned his J.D. degree from there in 1964. Miller was admitted to the Massachusetts Bar and the Federal Bar.

Upon graduation, Miller joined the U.S. Department of Justice as an Assistant U.S. Attorney for the District of Massachusetts. In 1965, he founded the Bay State Banner and served as the newspaper’s publisher, editor, and chief executive officer. In 1973, the Massachusetts Banking Commission appointed Miller as the conservator and chief executive officer of the Unity Bank and Trust Company, Boston’s first minority bank. In 1977, Boston Mayor Kevin W. White named him as one of the three commissioners of the Boston Water and Sewer Commission. Miller became Chairman of the Commission in 1980. Miller then became a founding partner in the corporate law firm of Fitch, Miller, and Tourse where he practiced law from 1981 to 1991. He also served as the vice president and general counsel of WHDH-TV, an affiliate of the Central Broadcasting Station, from 1982 to 1993. Miller was a director of the United States-South Africa Leadership Exchange Program (USSALEP). He has written editorials for The Boston Globe, The Pilot, and Boston Magazine, and is the author of How to Get Rich When You Ain’t Got Nothing.

Miller is a member of Sigma Pi Phi Fraternity, Alpha Phi Alpha Fraternity, the Harvard Club of Boston, and the St. Botolph Club. Miller is a director of OneUnited Bank and MassINC. He is also a trustee of the Huntington Theatre Company and a trustee emeritus of Boston University.

Miller received the Award of Excellence from the Art Director’s Club of Boston in 1970. The New England Press Association awarded Miller the First Prize in General Excellence and the Second Prize in Make-up & Typography in 1970. Miller is a recipient of the Annual Achievement Award from the National Association for the Advancement of Colored people. Miller received an Honorary Doctor of Humane Letters degree from Suffolk University in 1984 and an Honorary Doctor Humane Letters degree from Emerson College in 2010.

Melvin B. Miller was interviewed by The HistoryMakers on April 24, 2013.

See how Melvin Miller is related to other HistoryMakers
Donate Now
Click Here To Explore The Archive Today!