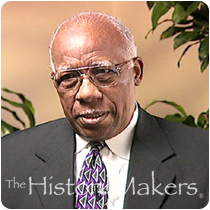 See how Melvin E. Banks is related to other HistoryMakers
Donate Now

Publisher Melvin E. Banks was born in Birmingham, Alabama on October 15, 1934. Banks graduated from Parker High School in Birmingham in 1952, and from there he attended the Moody Bible College in Chicago, where graduated in 1955. Continuing his education, Banks attended Wheaton College, earning a B.A. degree in theology in 1958 and his master’s degree in biblical studies in 1960.

Following his graduation, Banks was employed by Scripture Press Publications, where Banks helped bring their products into Black churches nationwide. In 1970, Banks founded Urban Ministries, Inc., which produces Bible study materials for people in urban communities with an emphasis on the African American community. Over the ensuing decades, his company has grown to serve over 100,000 Sunday school and vacation bible school teachers across the country, as well as materials for adult education. Four of the videos produced by Urban Ministries have been honored with either Chicago Emmy awards or Angel Awards.

Banks is also the founder of the Urban Outreach Foundation, which conducts training seminars around the country. He also sponsors yearly conferences, and a number of notables, including Dr. Michael Battle, Rev. Floyd Flake and Jesse Jackson. Banks serves as a trustee at his alma mater of Wheaton College, as well as the Circle Y Ranch, which is a children’s camp. He and his wife, Olive, have been married since 1955. They reside in Chicago.

See how Melvin E. Banks is related to other HistoryMakers
Donate Now
Click Here To Explore The Archive Today!