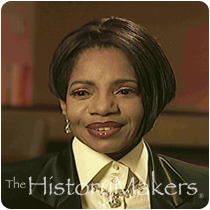 See how Melba Moore is related to other HistoryMakers
Donate Now

Moore returned to the Newark Public Schools and student taught at the Pershine Avenue Elementary School. As a teacher, Moore began to perform with other teachers that formed a cultural performance group called Black Voices. In 1968, Moore began to work at various studios in Manhattan where she provided background vocals for the likes of Frank Sinatra and Aretha Franklin. While working at one such session, Moore was encouraged to audition for the Broadway musical Hair in 1968. She succeeded Diane Keaton in the lead role in 1969.

Moore went on to play recurring roles in several hit Broadway productions including Purlie, which she won a Tony Award for Best Supporting Actress in a Musical, Inacent Black, Timbuktu and Les Misérables. In 1975, alongside her then-husband Charles Huggins, Moore formed Hush Productions and signed R&B artist Freddie Jackson. That same year, she released her Grammy-nominated, debut album entitled Peach Melba. Throughout the 1980s, Moore made appearances on several television and movie productions including Ellis Island. In 2003, she was featured alongside Beyoncé Knowles and Cuba Gooding, Jr. as “Bessie Cooley” in The Fighting Temptations.

Melba Moore was interviewed by The HistoryMakers on April 28, 2010.

Sponsored by A and E

See how Melba Moore is related to other HistoryMakers
Donate Now
Click Here To Explore The Archive Today!