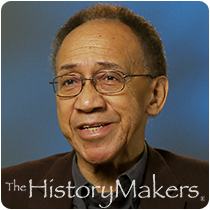 See how Mel Watkins is related to other HistoryMakers

Journalist and author Mel Watkins was born on March 8, 1940 in Memphis, Tennessee to Pittman and Katie Watkins. Although born in Memphis, Watkins grew up in Youngstown, Ohio. In 1962, he received his B.A. degree in art history from Colgate University. While there, he worked a summer job as a copy boy for the New York Daily News.

Upon graduation, Watkins sold books in Harlem, New York for the Negro Book Club, and from 1963 to 1964, he worked as a claims examiner for the Federal Social Security Department. In 1964, Watkins was hired as a copy boy for The New York Times’ Sunday sections. He was soon promoted to clerk for The New York Times Sunday Book Review. In 1968, Watkins was made a book editor, and became the first African American staff editor for The New York Times Sunday Book Review. As an editor and writer for the Sunday Book Review from 1968 to 1985, he contributed hundreds of book reviews and articles on literature, sports and entertainment. Later, he contributed obituaries of such artists as George Carlin, Richard Pryor, Rodney Dangerfield and Gwendolyn Brooks. Watkins also served as the book page editor for Penthouse magazine from 1977 to 1978, and as book page editor for American Visions magazine from 1986 until 1991. In addition, he worked as an instructor at Rutgers University in 1992 and 1993; in 2007, he was hired as National Endowment for the Humanities Professor of Humanities at Colgate University.

Watkins has edited, authored and co-authored numerous books and anthologies, including To Be a Black Woman: Portraits in Fact and Fiction (1971); Black Review Number One (1971); Black Review Number Two (1972); Race and Suburbia (1973); African Art: From the Nelson A. Rockefeller Collection (1987); On the Real Side: Laughing, Lying, and Signifying--The Underground Tradition of African-American Humor That Transformed American Culture, from Slavery to Richard Pryor (1994); Dancing with Strangers: A Memoir (1998); The Bob Love Story: If It's Gonna Be, It's up to Me (2000); African American Humor: The Best Black Comedy from Slavery to Today (2002); and Stepin Fetchit: The Life & Times of Lincoln Perry (2005). Watkins also wrote introductions for the first six volumes of the Howard University Press Library of Contemporary Literature Series in 1984. He was the recipient of an Alicia Patterson Foundation journalism fellowship in 1979, and, in 2002, his memoir, Dancing with Strangers, was the initial selection in Youngstown State University’s annual Freshman Reading Dialogue. Watkins has also frequently appeared as a commentator on television documentaries focused on entertainment, show business personalities, and social issues.

Mel Watkins was interviewed by The HistoryMakers on February 17, 2014.

See how Mel Watkins is related to other HistoryMakers