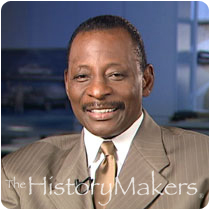 Favorite Color:
Yellow
Favorite Time of Year:
Spring
Favorite Vacation Spot:
Bahamas
Favorite Quote:
You only gonna earn today what your skills and efforts allow you to and no more.

Favorite Color:
Yellow
Favorite Time of Year:
Spring
Favorite Vacation Spot:
Bahamas
Favorite Quote:
You only gonna earn today what your skills and efforts allow you to and no more.

See how Mel Farr, Sr. is related to other HistoryMakers

Mel Farr enjoyed success on and off the football field. Farr was an All American and All Pro running back, and then later shot to the top of the African American business world when the Mel Farr Auto Group grossed a staggering $596.6 million dollars in 1998. Farr was born November 3, 1944 in Beaumont, Texas, to Miller Farr, Sr. and Doretha Farr.

A natural athlete, Farr excelled in baseball, basketball, track and football. It was football that captured Farr's imagination, as he was inspired by an outstanding collection of local heroes. Al LaBlanc, Bubba Smith, Buck Buchannan, Jerry LeVias, Warren Wells and other football greats all came from the "Golden Triangle" area around Beaumont. Farr was widely recruited from black Hebert High School in 1963, choosing the University of California, Los Angeles. At UCLA, Farr was a consensus All American from 1963 to 1967. He was also NFL Rookie of the Year in 1967 with the Detroit Lions and made the All Pro Team in 1967 and 1972. Plagued by injuries, Farr retired in 1973, ready to make the transition from football hero to businessman.

Determined to have a career beyond the gridiron, Farr completed his degree at the University of Detroit while still in the National Football League. He worked during the off-season for the Ford Motor Company in its management program. In 1975, Mel Farr Ford opened at 2470 Greenfield Road in Oak Park, Michigan. Targeting the inner-city population with its high credit risk, but its need for automobiles and ready financing, Farr employed a variety of creative marketing and management approaches. Purchasing additional dealerships beginning in 1986, Farr's empire grew to over thirteen dealerships and a Seven-Up Bottling Plant. By 1998, the Mel Farr Auto Group was the top African American business in the country and the thirty-third largest auto dealership in the United States.

See how Mel Farr, Sr. is related to other HistoryMakers
Click Here To Explore The Archive Today!