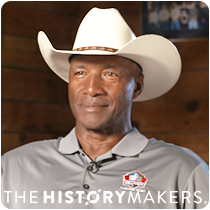 Football player Mel Blount was born on April 10, 1948 in Vidalia, Georgia to Alice Sharpe Blount and James Blount. A natural athlete, Blount excelled in football, baseball and track at Lyons High School. He graduated in 1966, and received an athletic scholarship to attend Southern University in Baton Rouge, Louisiana. During his college years, Blount was named a Pro Scouts All-American as both a safety and cornerback. In the spring of 1970, Blount was drafted in the third round by the Pittsburg Steelers just months prior to earning his B.S. degree in physical education.

By his third year in the NFL, Blount was a starting cornerback for the Steelers. Known for utilizing the bump and run technique, Blount’s dominance as a player inspired the NFL to impose a rule that prohibited contact between defensive backs and receivers until the five yard line. The rule, which was later known as the Mel Blount Rule, was meant to slow Blount on the field and make gameplay more competitive. However, Blount made three Pro Bowls and earned first-team All Pro in 1981. He had 57 career interceptions for 736 yards, more than any player in Steelers history, with thirteen fumble recoveries. After retiring in 1983, Blount became the director of player relations for the NFL, serving until 1990. He also established The Mel Blount Youth Home in 1983, opening the first home in his hometown of Vidalia. Blount wrote the book The Cross Burns Brightly about the adversity and racism he faced in opening the second youth home in Washington County, Pennsylvania.

Blount was interviewed by The HistoryMakers on July 18, 2018.