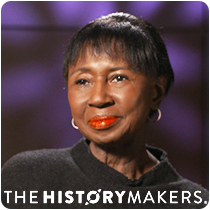 See how McGhee Williams Osse is related to other HistoryMakers

Advertising executive McGhee Williams Osse was born on November 10th in Columbus, Georgia to Sallie Mae Gamble McGhee and Nelson McGhee. After earning her B.A. degree in English at Spelman College and completing post-graduate coursework in advertising at the University of South Carolina. Osse worked as a traffic manager for WSB-Radio Atlanta and was later hired as a copy-editor and layout artist at Sears; and she went on to work as a field marketing manager for KFC, and a marketing manager at General Mills Restaurant Group, and a marketing director for RTM, Inc.

Osse has served on several boards, including the American Association of Advertising Agencies (4A’s) Regional Board of Directors; Ad Council Chicago Leadership Committee; and the Mosaic Council Executive Committee (American Advertising Federation). She has also been actively involved with the Partnership for A Drug-Free America, the Clear Channel Community Board of Advisors, the Foundation for Sarcoidosis Research, and Medical Wings International.

Osse received numerous awards and accolades for her career in advertising, including the Chicago Minorities in Business Leadership Award in 2007, Ebony’s outstanding women in marketing and communication award and the ‘advertising legend’ award from the ADCOLOR industry coalition. She was also honored by the National Alliance of Market Developers and the Black United Fund of Illinois. Under her leadership, Burrell Communications was named Black Enterprises Advertising Agency of the Year as well as awarded the Minority Marketing and Communications Firm of the Year Award in 2015.

McGhee Williams Osse was interviewed by The HistoryMakers on February 19, 2018.

See how McGhee Williams Osse is related to other HistoryMakers