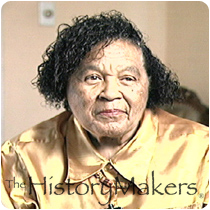 See how Mayme Clayton is related to other HistoryMakers

Curator and librarian Mayme A. Clayton was born to Mary Dorothy Knight Agnew and Jerry Modique Agnew in Van Buren, Arkansas on August 4, 1923 . She graduated high school at the age of sixteen, and moved to Los Angeles, California in 1946. She earned her B.A. degree from the University of California-Berkeley. She earned her master’s of library science degree from Goddard College via correspondence to their Vermont campus and a Ph.D. degree from Sierra University in Los Angeles.

Clayton began her career as a librarian in 1952, working at the Doheny Library at the University of Southern California. In 1957, she left the University of Southern California to become a law librarian at the University of California, Los Angeles,and also served as a consultant and founding member of the Afro-American Studies Center Library. After working at University of California Los Angeles for fifteen years, Clayton took a position at Universal Books in Hollywood, California. When the store closed, the partners in the store divided the remaining volumes between themselves. Clayton received all of the books that pertained to Black society and culture – more than 4,000 volumes. Clayton’s collection of African American ephemera has continued to grow; it now contains more than 20,000 pieces, including films, books, magazines, music and advertisements. Some of the items in this collection include signed first editions of works by Zora Neale Hurston, handwritten correspondence from George Washington Carver, as well as a rare signed copy of Phyllis Wheatley’s Poems on Various Subjects Religious and Moral . Currently, the collection resides in the Mayme A. Clayton Library and Museum in Culver City, California. Clayton served as the president of the center.

Clayton was the founder of the Black American Cinema Society, which awards scholarships and hosts film festivals. She was the recipient of numerous awards, including the Phoenix Award and the Paul Robeson Award.

See how Mayme Clayton is related to other HistoryMakers
Click Here To Explore The Archive Today!