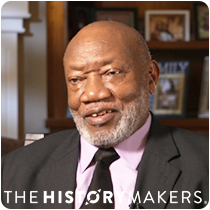 See how Mayfield Evans is related to other HistoryMakers
Donate Now

Entrepreneur Mayfield Evans was born on November 17, 1935 in Greensboro, Alabama to Murphey and Alice Evans. After graduating from Hale County Training School in 1955, Evans enlisted in the U.S. Air Force, where he served as a chef.

From 1967 to 1968, Evans worked as an assistant meat market manager and accounting clerk at Grand Fork Air Force Base in North Dakota. Evans then served as an assistant meat market manager and warehouse supervisor at San Vito dei Normanni Air Station in Italy. From 1970 to 1974, Evans worked as a warehouse supervisor and meat department manager at the Royal Air Force Chicksands Commissary in Bedfordshire, England. He then worked as an assistant store manager at Carswell Air Force Base in Fort Worth, Texas until 1976, when he became chief of human services at Elmendorf Air Force Base in Anchorage. From 1977 to 1979, Evans also served as Alaska Air Command Superintendent. In 1978, he founded E&S Diversified Services, Inc., an organization that provided custodial services, warehouse management services, commissary management, and food service in Anchorage. Evans retired from the U.S. Air Force in 1983, with the rank of senior master sergeant. From 1998 to 2015, Evans served as the executive director of MQC Enterprises, Inc.

Evans was named outstanding volunteer in philanthropy by the Alaska Chapter of the National Society of Fund Raising Executives in 1996. He also served on the Alaska Veteran’s Advisory Council, the Alaska Workforce Investment Board, the advisory commission for the Anchorage Police Department, and the Mountain View Task Force. He was vice president of the NAACP Anchorage chapter, and served as a member of Alaskan Governor Tony Knowles’ transition team as well as Alaskan Governor Frank Murkowski’s transition team. Evans was a member of the Committee on Employment and Rehabilitation of People with Disabilities from 2003 to 2008. For his service in the military, he received the Air Force Commendation Medal, the National Defense Service Medal with three bronze oak leaf clusters, and the meritorious service medal.

Evans and his wife, Willie Mae, have three children: Melphine, Jacqueline, and Barry.

Mayfield Evans was interviewed by The HistoryMakers on May 18, 2018.

See how Mayfield Evans is related to other HistoryMakers
Donate Now