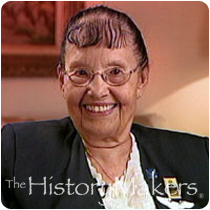 Favorite Color:
Red
Favorite Food:
Yams
Favorite Time of Year:
Spring
Favorite Quote:
Let Me Live In A House By The Side Of The Road And Be A Friend To Man.

Favorite Color:
Red
Favorite Food:
Yams
Favorite Time of Year:
Spring
Favorite Quote:
Let Me Live In A House By The Side Of The Road And Be A Friend To Man.

See how Maycie Herrington is related to other HistoryMakers

Community volunteer and black history conservator Maycie Herrington was born in Raleigh, North Carolina, on November 7, 1918, to Dicie and Thomas Copeland. She attended St. Augustine College for grade school and later Lucille Hunter School. Herrington graduated from Washington High School in 1936. She returned to St. Augustine's College, worked for her tuition and graduated with a B.S. in 1940. In 1943, during World War II, Herrington married former St. Augustine's College classmate, Aaron Herrington, who was soon sent by the army to Tuskegee, Alabama, for flight training.

Herrington quit her job as a bookkeeper with Mechanics and Farmers Bank and joined her husband in Tuskegee where she found employment with the Red Cross. In Tuskegee, Herrington became a familiar face to many of the Tuskegee Airmen. After the war, Herrington and her husband moved to Long Beach, California, where she found employment as a social worker with the Bureau of Public Assistance. There, she was assigned to work with the Long Beach Area Welfare Planning Council United Way, and to coordinate summer camps and Christmas activities. Herrington served in that capacity for more than thirty years. The emergency food assistance program in Compton that Herrington started is still in existence today.

Active in community affairs, Herrington was a member of the Long Beach Altrusa Club, the Long Beach County Grand Jurors' Association, and the African American Heritage Society of Long Beach. As a historical conservator, she was active in keeping the legacy of the Tuskegee Airmen alive. One of Herrington's contributions was a set of Tuskegee Airmen trading cards. Each card includes a photo and biography of a Tuskegee Airman. These cards educate the public and help finance the Airmen's youth outreach programs. Herrington was the recipient of the Hannah G. Solomon Award, the Women Helping Women Award, the Rick Racker Woman of the Year Award, and the National Conference for Community and Justice Humanitarian Award.

See how Maycie Herrington is related to other HistoryMakers
Click Here To Explore The Archive Today!