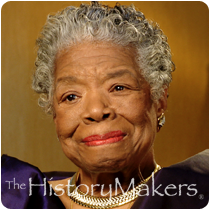 See how Maya Angelou is related to other HistoryMakers

Poet, author, and professor Maya Angelou was born as Marguerite Johnson on April 4, 1928 in St. Louis, Missouri, to Bailey and Vivian Baxter Johnson. Angelou’s older brother, Bailey Jr., nicknamed her “Maya” when they were children. When Angelou was three years old, her parents divorced and sent her and her brother to live with their grandmother in the harshly segregated Stamps, Arkansas. Angelou and her brother moved back and forth between Stamps and St. Louis throughout their formative years. During World War II, Angelou attended George Washington High School and San Francisco’s Labor School, dropping out for a short while to work as the first Black female streetcar conductor in San Francisco, but eventually graduating at the age of seventeen. Three weeks after her graduation, she gave birth to her only son.

Around 1950, Angelou, then a calypso dancer, changed her name from Marguerite Johnson to the more theatrical Maya Angelou. From 1954 to 1955, Angelou toured Europe with a production of the opera Porgy and Bess, and three years later, she moved to New York City in order to concentrate on her writing career. Around the same time, she served as the Northern Coordinator for the Southern Christian Leadership Conference (SCLC) under Dr. Martin Luther King, Jr. In 1961, Angelou moved to Cairo, where she wrote for the weekly newspaper, "The Arab Observer", then to Ghana, where she taught at the University of Ghana's School of Music and Drama and worked as a feature editor for "The African Review". Angelou returned to the United States in 1964 to help Malcolm X build the Organization of African American Unity. Unfortunately, when Malcolm died, so too did the organization.

In 1970, Angelou published her famed autobiography, I Know Why the Caged Bird Sings, for which she received a National Book Award nomination. This autobiography was followed by five other volumes, released in 1974, 1976, 1981, 1986, and 2002. Angelou’s first volume of poetry, "Just Give Me a Cool Drink of Water 'Fore I Diiie," was published in 1971, and nominated for the Pulitzer Prize the next year. In 1981, Angelou returned to the South, where she became the Reynolds Professor of American Studies at Wake Forest University in Winston-Salem, North Carolina. In 1993, she recited her poem "On the Pulse of Morning" at the inauguration of President Bill Clinton.

The recipient of a Tony Award nomination for her role in the 1973 Broadway play Look Away, Angelou was granted three Grammy Awards for her spoken word albums and an Emmy for her supporting role in the television miniseries "Roots." In 1998, Angelou was inducted into the National Women's Hall of Fame. She was the recipient of the National Medal of Arts in 2000 and the Lincoln Medal in 2008. Later in life, Angelou divided her time between Winston-Salem, North Carolina, and Harlem, New York. She had one son, two grandsons, and two great-grandchildren.

See how Maya Angelou is related to other HistoryMakers
Click Here To Explore The Archive Today!