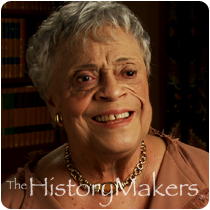 See how Maxine Smith is related to other HistoryMakers
Donate Now

Civil rights activist, executive secretary, and state government employee Maxine Smith was born on October 31, 1929, in Memphis, Tennessee. She graduated from Booker T. Washington High School and went on to receive her B.A. degree in biology from Spelman College and her M.S. degree in French from Middlebury College. In 1957, Smith applied to the University of Memphis and was rejected because of her race. This brought her to the attention of the local NAACP chapter, which she joined and became executive secretary of in 1962.

Having helped to organize the desegregation of Memphis public schools in 1960, Smith also escorted the first thirteen Memphis children to benefit from the Memphis school desegregation. Smith continued to fight for civil rights and school integration throughout her career, organizing lawsuits, sit-ins, and marches, including the “Black Monday” student boycotts that lasted from 1969 to 1972. Smith served on the coordinating committee for the 1968 Memphis sanitation workers’ strike that Martin Luther King Jr. travelled to Memphis to support before his assassination.

In 1971, Smith won election to the Memphis Board of Education, a position which she held until her retirement in 1995. In 1978, Smith was instrumental in ensuring W.W. Herenton’s election as the first African American school superintendant in Memphis, kicking off his political career. Smith was elected president of the Memphis Board of Education in 1991, the same year that her protégée Herenton became the first elected African American Mayor of Memphis.

Smith received more than 160 awards for her efforts on behalf of educational equality and civil rights, including the National NAACP Leadership Award, the Bill of Rights Award from the American Civil Liberties Union, and the Whitney H. Young Jr. Award from the National Education Association. She was a member of the board of directors for many charitable and civic organizations, including The National Civil Rights Museum, the NAACP, the Women’s Foundation for Greater Memphis, and the National Kidney Foundation. Smith has also been featured in several documentaries about the Civil Rights Movement, including Oscar-nominated Witness From the Balcony of Room 306 and Memphis: The Promised Land . She passed away on April 26, 2013.

See how Maxine Smith is related to other HistoryMakers
Donate Now
Click Here To Explore The Archive Today!