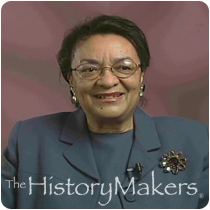 See how Maxine Duster is related to other HistoryMakers

Civic leader and educator Maxine Duster was born on August 23, 1939, in the all black town of Pelham, Texas, which was founded by her newly freed ancestors in 1866. Graduating from Pelham High School in 1956, Duster earned her B.S. degree in education from Texas Southern University in 1961. She would go on to earn masters degrees from Governors State University and National Louis University, both in Illinois.

Duster taught in the Chicago Public School System from 1961 through 1979. From 1982 to 1989, she served as manager of community relations for Michael Reese Hospital. Duster served as a member of the Board of Directors for the Harold Washington Foundation for several years, starting in 1987. Duster was director of the Chicago Urban League’s education-focused Smart Program from 1989 to 1991. She also served as vice principal and principal of the Corporate Community School of America from 1991 to 1995. Duster directed the Working in the Schools (WITS) program from 1995 to 1996. From 1997 to 2006, she managed the Reach Out and Read pediatric literacy program for Illinois’ Cook County Hospitals.

Well-known for her civic involvement, Duster serves on the Leadership Advisory Committee board of the Chicago Art Institute, the Legacy Fund Board of Advisors of the Chicago Community Trust and is a past president of the Chicago Child Care Society. She has served for many years as a founding member of the Black Creativity celebration at the Museum of Science and Industry.

Duster is married to Donald Duster. They live in Chicago and have three grown children: one daughter, Michelle, and two sons, David and Daniel.

See how Maxine Duster is related to other HistoryMakers
Click Here To Explore The Archive Today!