Information about Maxine B. Mimms 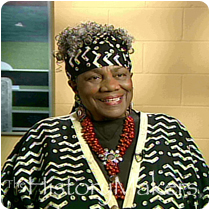 See how Maxine B. Mimms is related to other HistoryMakers

Educational institution founder, Maxine Mimms was born on March 4, 1928, in Newport News, Virginia, to Isabella DeBerry Buie and Benson Ebenezer Buie. Influenced by her grandparents' love for Marcus Garvey and educational lectures by Howard Thurman and other black leaders at nearby Hampton University, Mimms attended Booker T. Washington School and graduated from Huntington High School with highest honors in 1946. She earned her B.A. degree from Virginia Union University in 1950. In the early 1950s, Mimms served as a social worker in Detroit, Michigan. There, she was married and would eventually earn her Ph.D. in educational administration from Union Graduate School.

Accompanying her husband to Seattle, Washington, in 1953, Mimms taught at Leschi Elementary School, where Jimi Hendrix was a student. In 1961, Mimms taught in Washington’s Kirkland Public Schools until working for the Seattle Public School Administration in 1964. In 1969, Mimms served as the assistant to the director of the Women’s Bureau in the United States Department of Labor. In 1972, Mimms returned to the education field, working as a faculty member at Evergreen State College. At Evergreen State College, Mimms focused on developing an educational program that would serve place-bound working adult students. Her focus on serving the educational needs of urban, African American adult learners combined with an interest in teaching inner-city adults, led to the founding principles of the Tacoma Campus. Mimms eventually became the first Director of the Tacoma Campus, where she used her position to help satisfy the African American community’s demand for adult education programs.

In 1982, the Evergreen-Tacoma campus was formally established under Mimms’s leadership. Mimms’s mission as Director of Evergreen-Tacoma was to increase the number of African Americans in Washington with degrees and improve the household value on education for the African American community. Mimms became a national consultant in curriculum design and instructional methods. In 1990, Mimms retired as Director of Evergreen-Tacoma and became an emeritus faculty member. In 2001, Mimms was awarded the first annual Sustainable Community Outstanding Leadership Award. Recently, Mimms founded the Maxine Mimms Academy, a non-profit organization in Tacoma’s Hilltop neighborhood established to serve youth expelled or suspended from public schools.

See how Maxine B. Mimms is related to other HistoryMakers