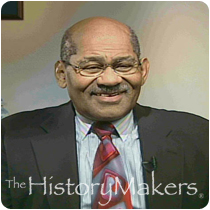 See how Maxie L. Patterson is related to other HistoryMakers
Donate Now

Maxie (Max) L. Patterson was born on June 12, 1944 in Detroit, Michigan to Myra and Harry Patterson. He was active in the science club, the marching band and achieved the rank of Master Sergeant in the ROTC. He graduated from Munford High School in 1962 and enrolled in Ferris State College, which he attended for two years. After leaving college, Patterson worked for the Ford Motor Company.

Patterson returned to college after the military. He received his B.A. and M.A. degrees in public administration in 1973 and 1977 from Michigan State University in East Lansing, Michigan. While attending Michigan State University, Patterson worked for the police department. In 1976, he was offered a job as the Police Chief of Albion, Michigan. Three years later, in 1979, he became the Police Chief of Windsor, Connecticut. After seven years, Patterson was persuaded to accept a position as Assistant City Manager of Beaumont, Texas, where he also served as the city’s Coordinator of the Minority Business Enterprise Program until 1989.

Patterson moved to Houston, Texas in 1989 to become Deputy Chief Administrative Officer. In 1991, he was appointed as interim Director of Housing and Community Development. From July 1992 to 1995, Patterson served as the Deputy Director and City Treasurer and ultimately was appointed City Treasurer. He worked as the fiduciary of the city’s three pension systems. In 1997, Patterson was hired as Executive Director of Houston’s Firefighter’s Retirement Fund until 2005 when he became the Executive Director of Texas Association of Public Employee Retirement Systems.

Patterson lives in Houston, Texas with his wife Deborah. They have four children.

Patterson was interviewed by The HistoryMakers on February 9, 2007.

See how Maxie L. Patterson is related to other HistoryMakers
Donate Now
Click Here To Explore The Archive Today!