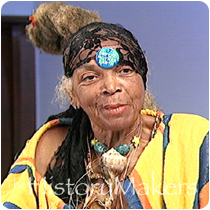 See how MaVynee "Beach Lady" Betsch is related to other HistoryMakers

Environmental activist and opera singer MaVynne “Beach Lady” Betsch was born on January 13, 1935 in Jacksonville, Florida. She was raised in one of the most preeminent black families in the South. Betsch is the daughter of Mary and John Betsch, and the great-granddaughter Abraham Lincoln Lewis, who founded Florida’s oldest African-American beach, and Anne Kingsley, the African American wife of plantation owner Zephaniah Kingsley. Betsch was educated at the Oberlin Conservatory of Music in Ohio. Upon completion of her bachelors’ degree in 1955, she moved to Europe where she was an opera singer for ten years.

Since 1975, Betsch made it her full-time mission to preserve and protect American Beach, her great-grandfather’s investment, from development and destruction. She was famously named “Beach Lady,” for her many efforts and dedication to the beach and its inhabitants. ‘Beach Lady’ gave her life savings, some $750,000, to sixty environmental organizations and causes, ten of which she was a lifetime member, and most of them involved animals. ‘Beach Lady’ was featured on CBS and CNN and in such publications as Coastal Living, Essence, Southern Living, Smithsonian and over twenty-five others. Betsch also dedicated part of her life in convincing others that nature and natural things are fine. ‘Beach Lady’ had natural hair that was grown for over twenty years and measured over seven feet long in some areas; she also had one foot long finger nails on one of her hands, trying to prove that things can grow naturally without protein from meat.

Even after being diagnosed with cancer in 2002, which caused the removal of her stomach, ‘Beach Lady’ continued working hard for causes that benefitted others. She developed plans for the American Beach Museum, opened in 2014, which contains the history of American Beach, the town where she lived many of the years of her life. Betsch never married and never had children. She was the older sister of Dr. Johnnetta B. Cole, the first female African American president of Spelman College, and president of Bennett College.

See how MaVynee "Beach Lady" Betsch is related to other HistoryMakers
Click Here To Explore The Archive Today!