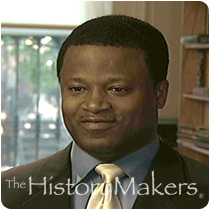 See how Maurice Ashley is related to other HistoryMakers
Donate Now

International Grandmaster of Chess Maurice Ashley was born on March 6, 1966, in St. Andrew, Jamaica. When Ashley was twelve years old he moved with his family moved to the Brownsville section of Brooklyn, New York. With instruction from his older brother, Ashley began to play chess. During his high school years at Brooklyn Tech in the early 1980s, Ashley failed to make the chess team, but despite this setback, he resolved to compete in local tournaments. Ashley joined the Black Bear School of Chess, a local group of African American chess enthusiasts from Brooklyn, and by the time he graduated from high school in 1984, Ashley had determined to attain the highest possible chess player ranking of Grandmaster.

Within two years, Ashley had become a National Master; he also became the captain of the City College of New York’s chess team, which competed in the Pan-American Intercollegiate Championship in 1987. Ashley studied English in college, and in his free time coached the Raging Rooks chess team at Harlem’s Junior High School #43. In 1991, at the age of twenty-five, Ashley led the Rooks to victory in the National Junior High School Championships in Dearborn, Michigan. Eventually Ashley would lead the Rooks to a total of two state championships and one national championship.

In 1991 Ashley became the Harlem Educational Activities Fund’s chess director after realizing how much he enjoyed coaching the game. Two years later Ashley became an International Master of Chess, the first African American in U.S. history to obtain this ranking; he also finished in first place at the esteemed Enhance International Chess Tournament and became champion of Manhattan’s Marshall Chess Club Championship. 1993 also marked Ashley’s first year as coach of Mott Hall Elementary’s Dark Knights Chess Team, a group that would go on to win two consecutive championships on the national level.

In 1995 Ashley’s daughter Nia was born; that same year Ashley became a commentator for the World Championship between Kasparov and Anand. In 1996, Ashley would serve as a commentator for Kasparov’s legendary Man vs. Machine match against the computer Deep Blue. The following year, Ashley left his coaching work to focus his efforts on becoming an International Grand Master of Chess.

At age thirty-three, Ashley became the first African American to attain the rank of International Grand Master of Chess in 1999, joining a list of approximately 800 chess players worldwide to have obtained the title. This achievement was reported in a variety of publications across the globe, including The New York Times and Sports Illustrated. That September, Ashley opened the Harlem Chess Center, which offered classes and computer chess training. In 2000 and 2001, Ashley became the first consecutive winner at the Foxwoods Open, and in 2003 Ashley became the U.S. Chess Federation’s Grandmaster of the Year. Ashley runs the Maurice Ashley Foundation, an organization which he hopes will establish chess as a significant tool for developing young people’s educational growth. In addition to his work with the Foundation, Ashley has produced an assortment of educational tools to spread his message about the positive benefits of chess; these include the book Chess for Success: Using an Old Game to Build New Strengths in Children and Teens, the DVD Speed Chess, and the CD ROM Maurice Ashley Teaches Chess.

See how Maurice Ashley is related to other HistoryMakers
Donate Now
Click Here To Explore The Archive Today!