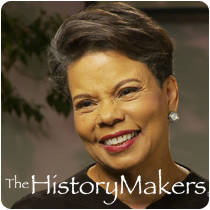 Favorite Color:
Purple
Favorite Food:
Nuts (Cashew)
Favorite Time of Year:
Spring
Favorite Vacation Spot:
Patagonia, Chile
Favorite Quote:
Do unto others as you would have them do unto you.

Favorite Color:
Purple
Favorite Food:
Nuts (Cashew)
Favorite Time of Year:
Spring
Favorite Vacation Spot:
Patagonia, Chile
Favorite Quote:
Do unto others as you would have them do unto you.

See how Maureen Bunyan is related to other HistoryMakers

Television news anchor Maureen Bunyan was born in 1945 on the island of Aruba to Arthur and Wilhelmina Bunyan. Her parents had moved from Guyana to Aruba in the 1930s, looking for better work opportunities. The family immigrated to the United States when Bunyan was just eleven years old, after her father accepted a job with a company in Milwaukee, Wisconsin. Arthur Bunyan always stressed the importance of education to his children and at one point all members of the family were enrolled in local schools, each studying for an undergraduate degree. Bunyan herself received her B.A. degree in English and education from the University of Wisconsin-Milwaukee. Still in college, she worked as a free-lance writer for the Milwaukee Journal.

Bunyan went on to attend the Columbia University School of Journalism in 1970. After school, she worked in broadcasting with Boston’s WGBH-TV and later New York’s WCBS-TV. In 1973, Bunyan became the lead news anchor and reporter at WTOP-TV (now WUSA-TV), the CBS affiliate in Washington, D.C. After working on the Eyewitness News Team, she became a co-anchor with Gordon Peterson and remained in this position until she resigned in 1995. Bunyan returned to school to receive her M.A. degree from the Harvard University Graduate School of Education in 1980. As a lead news anchor, Bunyan covered major local, national, and international stories, traveling to Central and South America, the Caribbean, Asia and Africa. Bunyan established a reputation as a clear-thinking, clear-spoken, fair-minded and dependable newsperson. From 1997-1999, Bunyan served as the chief correspondent for PBS’ Religions and Ethics Newsweekly.

In 1999, Bunyan joined WJLA-TV ABC 7 News in Washington D.C. as a primary anchor. Five years later, she was reunited with co-anchor Gordon Peterson for the 6:00pm EST news. During her career, Bunyan also served as a frequent substitute host for Talk of the Nation on National Public Radio and The Derek McGinty Show on WAMU Radio. Bunyan was one of the founding members of the National Association of Black Journalists in 1975, as well as the International Women’s Media Foundation in 1990. She has won a number of awards including Journalist of the Year in 1992, the Immigrant Achievement Award from the American Immigration Law Foundation in 2002, as well as receiving a number of local Emmys for her captivating work.

Maureen Bunyan was interviewed by The HistoryMakers on August 29, 2012.

See how Maureen Bunyan is related to other HistoryMakers
Click Here To Explore The Archive Today!