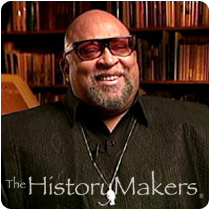 Favorite Color:
Black, Green, Red
Favorite Quote:
It is a good day to struggle and that we must remember the teachers of the Ottoeva (ph.), that we are all divinely chosen to bring into the world and not let any good be lost.

Favorite Color:
Black, Green, Red
Favorite Quote:
It is a good day to struggle and that we must remember the teachers of the Ottoeva (ph.), that we are all divinely chosen to bring into the world and not let any good be lost.

See how Maulana Karenga is related to other HistoryMakers

Dr. Maulana Karenga, professor of Africana Studies at California State University—Long Beach, was the holder of two Ph.D.’s. Karenga completed his degrees in political science at the United States International University, and in social ethics at the University of Southern California, before being awarded an honorary doctorate from the University of Durban, South Africa.

A prolific writer, Karenga authored numerous scholarly articles and books, including: Maat, The Moral Ideal in Ancient Egypt: A Study in Classical African Ethics; Selections From The Husia: Sacred Wisdom of Ancient Egypt; The Book of Coming Forth By Day: The Ethics of the Declarations of Innocence; Odu Ifa: The Ethical Teachings; and Introduction to Black Studies. Karenga was also one of the creators of the pan-African cultural holiday Kwanzaa, and the Nguzo Saba (The Seven Principles), as well as the author of the authoritative text, Kwanzaa: A Celebration of Family, Community and Culture.

An activist-scholar of national and international recognition, Karenga played a major role in Black political and intellectual culture from the 1960s on. Karenga has, along with The Organization Us, been instrumental in such movements as Black Power, Black Arts, Black Studies, the Independent Schools, Afrocentricity, Ancient Egyptian Studies, the Million Person Marches, and the Reparations Movement. In addition to his activism, Karenga lectured on the life and struggle of African peoples on major campuses in the United States, Africa, the People’s Republic of China, Cuba, Trinidad, Great Britain, and Canada. Karenga served as the chair of The Organization Us; the National Association of Kawaida Organizations; and as the executive director of the African American Cultural Center and the Kawaida Institute of Pan-African Studies.

Karenga has received numerous awards for scholarship and service, including: the C.L.R. James Award for Outstanding Publication of Scholarly Works that Advance the Discipline of Africana and Black Studies; the National Leadership Award for Outstanding Scholarly Achievements in Black Studies from the National Council for Black Studies; the President’s Award for Scholarship and Service in the Development of Black Studies from the African Heritage Studies Association; the Diop Exemplary Leadership Award from the Department of African American Studies-Temple University; the Richard Allen Living Legend Award from the African Methodist Episcopal Church; and the Pioneer Award from the Rainbow PUSH Coalition and Citizenship Education Fund.

See how Maulana Karenga is related to other HistoryMakers
Click Here To Explore The Archive Today!