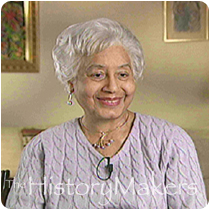 Opera singer Mattiwilda Dobbs was born on July 11, 1925 in Atlanta, Georgia. The fifth of six daughters, she sang her first solo at age six and began her musical studies in piano during Dobbs’ childhood. A member of the last graduating class from Atlanta University Lab School, Dobbs earned her high school diploma in 1942.

Receiving her B.A. degree in music from Spelman College in 1946, Dobbs began her formal voice training under the direction of Naomi Maise and Willis Laurence James. After graduating, she studied with Lotte Leonard and Pierre Bernac and attended the Mannes College of Music and the Berkshire Music Center’s Opera Workshop.

Dobbs gained notoriety after winning a 1951 international music competition in Geneva, Switzerland. In 1953, Dobbs performed at the La Scala Opera House in Milan, making her the first African American woman to appear in a principal role there. After becoming the first African American to play a major role for the San Francisco Opera in 1955, she debuted at New York’s Metropolitan Opera in 1956. Refusing to appear before segregated crowds, Dobbs did not perform in her hometown of Atlanta until 1962, where she appeared in front of an integrated audience at the Municipal Auditorium.

In 1999, Testament Records released Mattiwilda Dobbs: Songs and Lieder, a CD of her early recordings.

The aunt of former Atlanta Mayor Maynard Jackson, Dobbs has been married twice. Her first husband, Spanish playwright and journalist, Luis Rodriguez, died a year into their marriage. She then married Swedish newspaper journalist Bengt Janzon for nearly forty years until his death in 1997.

Dobbs passed away on December 8, 2015 in Atlanta, Georgia.

See how Mattiwilda Dobbs Janzon is related to other HistoryMakers
Donate Now
Click Here To Explore The Archive Today!