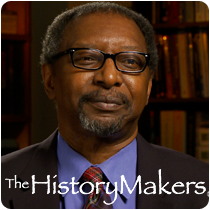 See how Matthew George is related to other HistoryMakers
Donate Now

From 1981 to 1984, George studied genetics and biochemistry at the San Diego Zoo and the National Cancer Institute in Frederick, Maryland. George’s career at Howard University College of Medicine began in 1984 when he became an assistant professor of biochemistry. In 1992, he was promoted to associate professor. George’s research focused on the evolution and interactions of mitochondrial DNA as well as cancer metastasis. He was instrumental in the development of the “mitochondrial Eve hypothesis,” which attempts to explain the origin of humankind. George studies the molecular structure and behavior of mitochondrial DNA which traced humans back to a common ancestor that lived in Africa about 200,000 years ago. Between 1995 and 1997, George served as senior scientist on the African Burial Ground Project where he traced 200 year old remains back to West African locations by analyzing DNA from bones. Since 2001, George has served as chair of the Department of Biochemistry and Molecular Biology at Howard University College of Medicine.

George has authored numerous scientific research articles, which have appeared in journals such as the Journal of Molecular Biological Evolution. In addition, his research has been funded by prestigious organizations such as the National Institute of Health, the National Cancer Institute and the National Center for Human Genome Research. His research on mitochondrial DNA was featured in the exhibit “Science in American Life,” found in the Smithsonian National Museum of American History. In addition to his research, George has mentored research students including several dissertation prize winners.

George lives in Silver Spring, Maryland with his wife Yolanda George, who is an education program director at the American Association for the Advancement of Science (AAAS).

George Matthew was interviewed by The HsitoryMakers on January 17, 2013.

See how Matthew George is related to other HistoryMakers
Donate Now
Click Here To Explore The Archive Today!