Information about Mattelia B. Grays 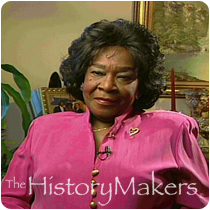 Favorite Color:
Turquoise
Favorite Food:
Seafood
Favorite Time of Year:
Fall, Winter
Favorite Vacation Spot:
Cities
Favorite Quote:
Live Every Day As If It Were Your Last Because Tomorrow Is Not Promised To You.

Favorite Color:
Turquoise
Favorite Food:
Seafood
Favorite Time of Year:
Fall, Winter
Favorite Vacation Spot:
Cities
Favorite Quote:
Live Every Day As If It Were Your Last Because Tomorrow Is Not Promised To You.

See how Mattelia B. Grays is related to other HistoryMakers
Donate Now

The 18th International President of Alpha Kappa Alpha (AKA) Sorority Incorporated (1970-1974), Mattelia Bennett Grays was born in Houston, Texas to the Reverend and Mrs. A.B. Bennett. Bennett graduated as salutatorian from Booker T. Washington High School in 1948 and went on to attend Dillard University in New Orleans, Louisiana, where she was initiated into the AKA Sorority in the Beta Upsilon Chapter. She received her B.A. degree from Dillard University in 1952 and was married to Horace Grays the same year. The couple has one daughter, Karen, and a grandson, Kristopher John Howard.

Grays went on to receive her M.A. degree with honors in special education from the University of Michigan in Ann Arbor, Michigan, and later received her Doctorate in educational administration from Pacific University in Sacramento, California in 1985. Grays returned to Houston to teach in the Houston Public Schools, where she also worked as a consultant for the Continuous Progress Learning Corporation and principal of Rogers Educational Enrichment Center. Grays served as principal of Rogers Educational Enrichment Center from 1970 to 1987. Under her leadership, the center served as a teacher training center and was named “One of Six Super Schools” by Texas Monthly magazine. After several years in Houston Public Schools, she began working summers with the University of Houston as a supervisor of laboratory experiences for teachers of culturally deprived children. She became District Three Superintendent of the Houston Independent School District in 1987. Grays transferred her AKA Sorority membership to the Alpha Kappa Omega Chapter in Houston and served as Chapter President and Regional Director of the Sorority’s South Central Region. She was the youngest person ever elected National President of the Sorority in 1968 and was installed at the Sorority’s biennial national convention in 1970.

As National President, Grays emphasized member involvement and was adamant about every member embracing her financial responsibility to the Sorority. She headed the Sorority’s effort to purchase the birthplace of Dr. Martin Luther King, Jr. and presented a check for $20,000 to Coretta Scott King. Her focus as Sorority President included Negro heritage brochures, chapter programs designed for the specific community that the chapter served, educational grants, Job Corps and leadership training.

Grays retired from the Houston Independent School District and continues to reside in Houston, Texas. She has been honored by several organizations including the AKA Sorority. AKA Sorority’s South Central Region has a scholarship fund named in her honor, and she is an Outstanding Alumna of the Booker T. Washington High School in Houston.

Grays was interviewed by The HistoryMakers on March 11, 2008 as part of the Alpha Kappa Alpha Sorority’s Centennial Boule 2008 celebration. Segments of these interviews were used in a DVD entitled A.K.A. Sorority: Legacy of Leadership.

See how Mattelia B. Grays is related to other HistoryMakers
Donate Now
Click Here To Explore The Archive Today!