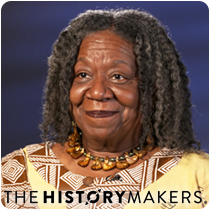 See how Maséqua Myers is related to other HistoryMakers
Donate Now

Producer Maséqua Myers was born on January 7, 1953 in Birmingham, Alabama to Thelma and Willie Myers. She attended Cook Elementary School in 1966 in Chicago, Illinois, and graduated from Calumet High School in 1970 in Chicago. Myers received her dual A.A. degrees in nursing and theatre in 1974 from Kennedy-King College, in Chicago.

Myers served as project developer for Urban Gateways in Chicago from 1974 to 1976, and worked at LaMont Zeno Theatre/Better Boys Foundation in Chicago from 1974 to 1979. She became the equity union deputy representative at the Goodman and Victory Gardens Theatres in Chicago and the John F. Kennedy Center in Washington, D.C. from 1979 to 1980. Myers served at the Wolftrap Institute for Early Learning as part of the Arts in Phoenix and Washington, D.C. from 1983 to 1985. She also handled contract negotiations at the Independent Professional Performing Artists Institute, in Phoenix, in 1985 and was co-owner and executive producer of Mixed Media Productions, Inc., in Phoenix and Los Angeles from 1986 to 1992. Myers also served as artist in residence at the Wolftrap Arts Institute, Washington D.C. and Phoenix, Arizona from 1986 to 1992.

Myers is credited for her work as producer/co-author of the internationally distributed educational video, Faces of Racism for the National YWCA of the USA in 1990. In 1992, she established and served as chief executive officer at Maséqua Myers and Associates; and, in 2014, she became the executive director, for the historic South Side Community Art Center.

Myers produced Miss Dessa, the romantic-comedy play, which received nine 1993 NAACP Theatre Awards Los Angeles, CA. She produced the pilot and episodes of Stories From the Soul, a half hour dramatic TV series for Robert Townsend, served as director of production for the Black Family Channel in 2005. She produced the documentary, Interview with A Chicago Cop, which was featured in the Arizona Black Film Festival in 2006. She was also the film training director for the feature film, Of Boys and Men starring Angela Bassett and Robert Townsend).

Maséqua Myers was interviewed by The HistoryMakers on June 13, 2018.

See how Maséqua Myers is related to other HistoryMakers
Donate Now