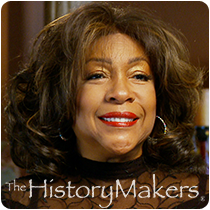 See how Mary Wilson is related to other HistoryMakers

Motown recording artist Mary Wilson was born in Greenville, Mississippi to Sam Wilson, a butcher, and Johnnie Mae Wilson, a homemaker, on March 6, 1944. At age three, Wilson’s parents sent her to live in Detroit, Michigan with her aunt, I.V. Pippin, and uncle, John L. Pippin. In 1952, Wilson moved to Detroit’s Brewster-Douglass Housing Projects. She was bused from the projects to Algers elementary school in 1956 when integration of public schools began. Wilson went on to graduate from Northeastern high school in 1962.

In 1959, Wilson joined a local singing group, Primettes, which also included Florence Ballard, Diana Ross and Betty McGlown. The Primettes performed at the 1960 Detroit-Windsor Freedom Festival amateur talent contest and won first place. In 1961, the group, which now included Barbara Martin, signed with Motown Records and changed their name to the Supremes. After Martin left the group in 1962 the Supremes permanently became a trio and traveled that year with “The Motortown Revue,” a showcase of Motown artists including the Temptations, Stevie Wonder and Marvin Gaye.

In 1963, the Supremes teamed up with writer-producers Brian Holland, Lamont Dozier and Eddie Holland (HDH). A few of their records received national airplay. Having recorded the Supremes, who had shared the lead singing for three years without a hit record, Gordy rearranged the group with Wilson and Ballard as background singers. The Supremes scored their first hit in 1963 with the song, “When the Lovelight Starts Shining Through His Eyes.” The group reached #1 on U.S. pop charts for the first time in 1964 with the hit record and single, Where Did Our Love Go.

In 1964, the Supremes became one of the first Motown acts to perform outside of the United States when they played at the Clay House Inn in Bermuda. The Supremes also began European tours starting with Great Britain and later toured elsewhere, including the Far East. Where Did Our Love Go was followed by four consecutive singles that reached #1 on the Billboard Hot 100 charts: “Baby Love,” which was also a #1 hit in the UK; “Come See About Me”; “Stop! In the Name of Love”; and “Back in My Arms Again.” “Baby Love” was nominated for the 1965 Grammy Award for Best R&B Song.

The Supremes became the first black pop group of the sixties to play New York City’s Copacabana, and the first pop group to play New York’s Philharmonic Hall in Lincoln Center in 1965. Wilson began a solo career after the group disbanded in 1977. As a solo performer, Wilson toured the world, recorded, acted on stage and television, and participated in celebrity charity events. Wilson wrote about her career with Motown and the Supremes in Dreamgirls: My Life as a Supreme (1986) and Supreme Faith: Someday We’ll Be Together (1990).

The Supremes received the NAACP Image Award for Best Female Group in 1972, and they were inducted into the Rock and Roll Hall of Fame in 1988. Wilson was honored in 1973 with a Mary Wilson Day in Detroit.

Mary Wilson Was interviewed by The HistoryMakers on November 19, 2013.

See how Mary Wilson is related to other HistoryMakers
Click Here To Explore The Archive Today!