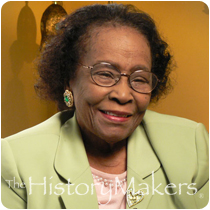 The 23rd International President of Alpha Kappa Alpha (AKA) Sorority, Inc., Mary Shy Scott was born on July 19, 1930, in Atlanta, Georgia, to Robert Shy and Flora Spearman Shy. Under Scott’s leadership, the AKA Sorority initiated an international chapter in London, England; established a non-military memorial to World War II veterans; helped to encourage reading through a partnership with the Library of Congress; and completed the building of an addition to the national headquarters.

Raised in Atlanta where she attended public elementary and high schools, Scott went on to enroll at Spelman College, where she graduated with her B.A. degree. In 1953, Scott was initiated into the Kappa Omega Chapter of the AKA Sorority. She continued her education by earning her M.A. degree from New York University. Afterwards, she completed her post graduate work in the humanities at New York University and Georgia State University, where she became certified in supervision and administration.

From 1982 to 1984, Scott served as the regional director of the Atlanta branch of the AKA Sorority. Later, in 1986, Scott became the first Anti-Basileus elect at the Boulé in Detroit, Michigan. In 1990, Scott was elected as the 23rd International President of AKA Sorority, Inc., at the Boulé in Richmond, Virginia. As international president, Scott was instrumental in the first non-military memorial to World War II veterans at Pearl Harbor, dedicated to the unsung hero, Doris Miller. She also completed the building and financing of the third story addition to the AKA Sorority national headquarters. Then, in 1992, Scott used her position to establish an international chapter in London, England, which existed until 2006. During her administration, she formed a partnership with the Library of Congress in a national campaign to promote reading. She also renewed the AKA Cleveland Job Corps contract.

Aside from her leadership roles in the AKA Sorority, Scott has worked as an educator, elementary school music specialist and motivational speaker. She has received many awards and recognitions including the Prominent American Personality Award from the President of the Republic of Benin. In 1990, Scott received an honorary Doctor of Humane Letters degree from Miles College in Birmingham, Alabama.

See how Mary Shy Scott is related to other HistoryMakers
Donate Now
Click Here To Explore The Archive Today!