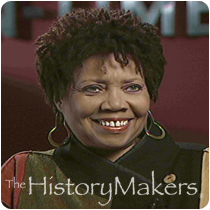 See how Mary Mitchell is related to other HistoryMakers
Donate Now

Mitchell became the first African American legal secretary at a major Chicago law firm, Seyfarth Shaw, LLP; she eventually quit her job as a secretary after twenty years of service. Taking writing courses at Columbia College and encouraged by Carol Holtz and P.J. Bednarski, Mitchell landed a successful internship with the Chicago Sun-Times in 1990. Graduating with her B.A. degree in journalism from Columbia College in 1991, Mitchell was hired full time by the Chicago Sun-Times. Covering educational issues, Mitchell’s five part series on Chicago Vocational High School earned her an award from the National Association of Black Journalists. From 1993 to 1995, Mitchell covered City Hall reporting on Operation Silver Shovel. Since the start of her column in 1996, Mitchell, like Carl Rowan and Vernon Jarrett before her, has attracted a large and diverse readership. Mitchell also cultivated a substantial national following via the Internet, receiving an average of 900 e-mails per week from readers.

See how Mary Mitchell is related to other HistoryMakers
Donate Now
Click Here To Explore The Archive Today!