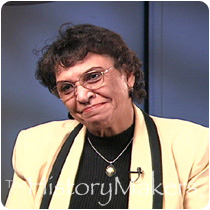 See how Mary Hatwood Futrell is related to other HistoryMakers

Mary Alice Franklin Hatwood Futrell was born on May 24, 1940, in Altavista, Virginia; her mother was a domestic and factory worker and her father worked in construction. Futrell was raised in a single parent household and did not develop a relationship with her father until she was an adult. In 1958, Futrell earned her high school diploma from Dunbar High School in Lynchburg, Virginia, where she was a cheerleader, and a member of student government, Future Business Leaders of America and the National Honor Society.

In 1962, Futrell received her degree in business education from Virginia State University where she was a cheerleader and pledged Delta Sigma Theta Sorority. From 1962 until 1964, Futrell worked as a teacher at the segregated Parker Gray High School in Alexandria, Virginia. In 1965, Futrell helped integrate the teaching staff at George Washington High School, where she taught business until 1980; while there, she earned her master’s degree in secondary education from George Washington University in 1968.

In 1983, Futrell became the president of the National Education Association, becoming the fourth minority to serve in the position; she remained there until 1989. During her three terms as NEA president, Futrell helped the organization achieve leadership status in the areas of civil and human rights, especially women’s rights. As a result of her tireless efforts, the NEA created the Mary Futrell Award to honor individuals whose activities in women’s rights have made a significant impact on education and on the achievement of equal opportunities for women and girls.

In 1992, Futrell joined the faculty at George Washington University, while earning her Ph.D. in education policy studies; in 1995, she was promoted to dean of the Graduate School of Education and Human Development. Futrell also served as the director of the George Washington Institute for Curriculum Standards and Technology.

Futrell served as the president of the World Confederation of Organizations of the Teaching Profession; The Virginia Education Association; Education International; and ERAmerica. Futrell published articles in a number of scholarly journals, such as Education Record, Foreign Language Annals and Education Administration Quarterly. For her work in education policy and reform, Futrell has been awarded numerous honors and awards, including more than twenty honorary degrees.

See how Mary Hatwood Futrell is related to other HistoryMakers
Click Here To Explore The Archive Today!