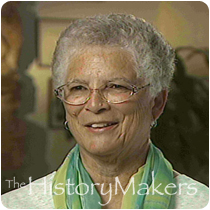 Journalist Mary Ellen Butler was born Mary Ellen Rose on May 8, 1940 in Berkeley, California. Her mother, Virginia Craft Rose, is the niece of Harvard University graduate and editor/activist Monroe Trotter. Her grandfather was Henry Kempton Craft (d.1974), an early black YMCA executive and a direct descendent of William and Ellen Craft, famous for their daring escape from slavery in 1848. Butler’s father, Joshua Richard Rose, headed the Northwest branch of the YMCA in Oakland, California, where she attended Durant Elementary School, Herbert Hoover Junior High School and Oakland Technical High School. Butler, who was mentored by journalism teacher Crystal Murphy, graduated in 1957. She attended the University of California at Berkeley where she earned her B.A. degree in journalism. Butler covered the school’s refusal to let Malcolm X speak for the Daily Californian.

Graduating in 1961, Butler was hired as a writer by Blue Cross of Northern California and then by Bank of America World Headquarters to write business reports. In 1964, Butler joined the Berkeley Daily Gazette as a reporter covering the Free Speech Movement, City Hall, desegregation in the Berkeley public schools, and the Black Panther Party. Butler also taught the history of black journalism at Laney College in Oakland. From 1971 to 1972, she served as reporter and editor of the Berkeley Post. Entering the Congressional Fellowship Program, Butler wrote speeches, press releases and position papers for United States Senator Alan Cranston and Congresswoman Shirley Chisholm in 1972 and 1973. She was a metro and feature reporter for the Washington Star, from 1973 to 1978.

In 1979, Butler returned to Oakland as writer and public information officer for the Oakland Unified School District. In late 1979, she joined the Oakland Tribune as “Lifestyle” editor. There, Butler managed a staff of thirty, producing eight newspaper sections per week including the “Sunday Lifestyle” and “Entertainment” sections. Moving to editorial writer in 1983, Butler wrote daily editorials and managed the political endorsement process. From 1990 to 1994, Butler was named Editorial Page editor. After fifteen years with the Oakland Tribune, she opened Butler Communications.

In 1992, Butler received the Best Editorial Award from the Contra Costa Press Club and first place for editorial writing from the California Newspaper Publishers Association. In 1995, she won first place for her essay “Leadership in a Changing World” from the Center for Creative Leadership. Butler was a member of the National Conference of Editorial Writers and is a founding member of the National Association of Black Journalists. She is the author of several books including Oakland Welcomes the World and Prophet of the Parks: The Story of William Penn Mott and edited Black Women Stirring the Waters.

Butler was interviewed by The HistoryMakers on April 13, 2007.

See how Mary Ellen Butler is related to other HistoryMakers
Donate Now
Click Here To Explore The Archive Today!