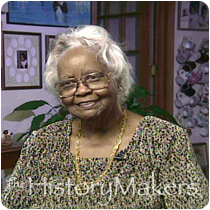 See how Mary Cherry is related to other HistoryMakers

Mary Cherry was born Mary Cornelia Kyle on March 18, 1924, in Manteo, Virginia, to Annie Mae Shelton Kyle and Samuel Gibson Kyle. Her mother could trace her family back four generations to Washington Lomax. Her family moved from Virginia to Tarrytown, in upstate New York, in 1926. Cherry’s father was sexton for the local Episcopal church, but her family were members of Shiloh Baptist Church in Tarrytown. Cherry attended F.R. Pearson Elementary School, where she was a good student who loved to read. At age 15, while a student at Washington Irving High School, Cherry met her future husband, Lamon Q. Cherry of nearby Ossining, New York. Graduating from high school in 1942, during World War II, Cherry found employment at Eastern Aircraft for two years, then worked briefly for Reader’s Digest.

In 1946, Cherry married Lamon and lived for a while in the Bronx, New York. The couple then relocated to Ossining, New York. There, Mary found employment with the Frank Novelty Company, which was owned and operated by recent Jewish immigrant, Al Franken. The company made prayer cards and other paper and plastic products for church use. Soon, her husband became Franken’s most trusted employee, and Cherry was able to offer seasonal employment and after school jobs to neighborhood teenagers, especially in the African American community.

Cherry is the mother of Lamon Q. “Quincy” Cherry, Jr., Rose Q. Cherry and Cheryl Cherry Taylor McMillan. She has several grandchildren. Rose Q. Cherry, Mary Cherry’s daughter, wrote the history of her husband's family in The Cherry Outlaw Families of Bertie County, North Carolina, which was published in 2004.

A member of the Star of Bethlehem Baptist Church, Cherry lives near her children in Atlanta, Georgia.

See how Mary Cherry is related to other HistoryMakers
Click Here To Explore The Archive Today!