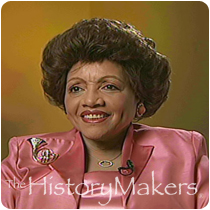 Civic leader, newspaper columnist, and nurse Mary Elizabeth “Betty” Brown has been a steady and stylish presence in Chicago and in Elgin, Illinois for more than thirty-five years. From her column, "Steppin Out with Betty Brown” in the Elgin Courier to serving as the first black nurse at Saint Joseph's Hospital in Joliet, Illinois, Brown has always been a trailblazer.

Born in Chicago, but raised in Schaumburg, Illinois on the estate of her father's employer, Brown and her two brothers had to learn to play quietly because the employer did not know his chauffeur's children lived in his coach house. Brown's mother also worked as the family cook, and after saving enough money, Thermon and Margaret Stephens moved their children to Elgin, Illinois. A multi-talented student of voice and dance, Brown was well known at her church, St. James AME Church, Wing Elementary and Elgin High School, but her mother discouraged her from pursuing singing.

Brown’s mother was a nurse's aide at Sherman Hospital and Brown decided to apply to the nursing program there, but she was promptly rejected. Disheartened, Brown approached St. Joseph's Hospital and became the first black nursing student in Joliet, Illinois. Not long after graduating, she married her sweetheart, Floyd Brown, who was just beginning to make a name for himself in Chicago radio. Brown served as a wardrobe and makeup consultant to Miss Illinois in the Miss America pageant for four years. She was named one of the One Hundred Women of Destiny selected by Marilyn Miglin & Associates. Brown received numerous awards for her civic work, including HI CHIC Award in Fashion, the Altrusa Outstanding Woman of the Year, Outstanding Woman in Advertising and the YMCA Margaret Henry Award.

Brown and her husband, Floyd Brown, live in Elgin, Illinois. They have two children and several grandchildren. Their son, F. Keith Brown, was the first black judge in the Northwestern Illinois suburbs. Their daughter, Diane Douglas, works in human resources.

Mary "Betty" Brown was interviewed by The HistoryMakers on January 26, 2006.

See how Mary "Betty" Brown is related to other HistoryMakers
Donate Now
Click Here To Explore The Archive Today!