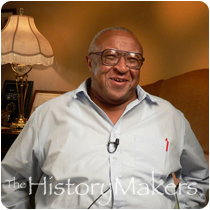 See how Marvin Perry is related to other HistoryMakers

Founder of the Black Board of Directors Project, Marvin Early Perry, was born on November 10, 1944, in Elmore City, Oklahoma. Perry earned his B.A. and M.S. degrees in economics from the University of Central Oklahoma and Oklahoma State University respectively. Shortly thereafter, Perry graduated from the American Bankers Association Commercial Lending School, beginning his professional career in banking.

In response to the vastly underrepresented amount of minorities on corporate boards, Perry founded the Black Board of Directors Project in Phoenix, Arizona in 1984. The project’s purpose is promoting the involvement of minorities in executive positions within corporate, nonprofit, and public policy making institutions at the state and national level. In the organization’s history, which spans over two decades, the Black Board of Directors Project has placed over 1,800 blacks and other minorities on various boards and commissions. By facilitating seminars and conferences centered on corporate board education, Perry hopes to empower members of Arizona’s black community by encouraging them to seek board membership on a corporate level. In doing so, local businesses and agencies will involve more minorities in their policy-making processes.

In 1995, Perry broadened his commitment to community service by becoming a founding board member on the Arizona State University College of Extended Education Dean’s Council. Perry aided the College of Extended Education for years in its mission to broaden access to quality education to all learners in Maricopa County and beyond. His leadership helped the college reach out to Arizona’s traditional and nontraditional learners through innovative locations, methods, curricula, schedules and technologies to meet their lifelong learning needs.

Perry was awarded for his dedicated service to higher education in 2002 when he was given a Distinguished Service Award from Arizona State University, and again in 2007 by receiving an honorary doctorate degree from the University of Advancing Technology. In 2008, Perry selected as the co-recipient of the Arizona State Bar of Arizona's Award of Appreciation.

Perry continues to expand his long history of civic involvement, including board service with the Arizona State Bar Association, the Hispanic Leadership Institute, the Arizona Civil Rights Advisory Board, the Valley of the Sun United Way, the Scottsdale Cultural Center, as well as a list of municipal and county committees and boards. Perry also serves as President of P.E. International, a Phoenix-based marketing and public relations firm.

See how Marvin Perry is related to other HistoryMakers
Click Here To Explore The Archive Today!