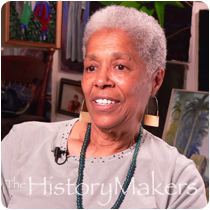 See how Marva Lee Pitchford-Jolly is related to other HistoryMakers

From 1961 to 1965, Pitchford-Jolly taught at the University of Chicago Laboratory School. She worked as teacher and director at the Chicago Youth Center Head Start from 1965 to 1969. Pitchford-Jolly then worked as program director at the Chicago Commons from 1969 to 1974. In 1974, she worked as a professor of ceramic at Chicago State University and the education coordinator of the Suburban Health System Agency until 1981. From 1981 to 1985, she was a self-taught ceramic artist and sculptor at the Press Artisan 21 Gallery in Chicago, Illinois. Pitchford-Jolly received an award in the Best Of Category at the Museum of Science and Industry in 1984. In 1986, she was recognized as a Top Ten Emerging Black Chicago Artist. A year later, Pitchford-Jolly worked as a curator at the Saphire and Crystals Black Women’s Art Exhibition. Her profile was featured in Today’s Chicago Woman Magazine and worked as an artist-in-residence for the Lakeside Group in 1988. Her work was also featured in the 2005 Chicago Woman’s Caucus for Art. In 2008, Pitchford-Jolly and David Philpot’s clay pots and carved wooden staffs were showcased in the “Kindred Spirits” Exhibit at the Noyes Cultural Arts Center. Her art is also exhibited and sold at the Esther Saks Gallery and was seen in Columbia Motion Pictures film, Date Night 7.

Pitchford-Jolly served on the board of directors of Urban Traditions in 1984 and the Chicago Cultural Center in 1986; a board member of the African American Rountable in 1985; and on the Exhibition Committee at the Chicago Cultural Center. In addition, Pitchford-Jolly volunteered at the Southside Community Art Center. Also, she is the founder of the Mude People’s Black Women’s Resources Sharing Workshop.

Pitchford-Jolly was interviewed by The HistoryMakers on July 15, 2008.

Marva Pitchford-Jolly passed away on October 21, 2012.

See how Marva Lee Pitchford-Jolly is related to other HistoryMakers
Click Here To Explore The Archive Today!