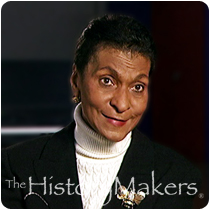 See how Marva Collins is related to other HistoryMakers
Donate Now

A woman passionate about learning, Marva Collins received her early education in Atmore, Alabama, a town where the segregated school system provided very few resources for African American students. Marva eventually attended Clark College in Atlanta and, after graduation, returned to Alabama. She taught for two years in the Alabama school system before moving to Chicago, where she worked in the public school system for fourteen years.

Frustrated by the Chicago Public Schools’ low standards, Collins decided to open her own school in 1975 on the second floor of her home, naming it the Westside Preparatory School. The first students included her son, daughter and several neighborhood children, some of which were considered learning-disabled. At the end of the first year, every student scored at least five grades higher on their standardized tests. Soon, Collins’ success attracted national attention. She and the Westside Preparatory School were profiled by 60 Minutes, Good Morning America, Time and Newsweek, and were the subject of a television movie, The Marva Collins Story.

Her achievements prompted President Ronald Reagan to offer her the post of secretary of education, which she declined in order to continue the development of Westside Preparatory School.

At the end of 1996, Collins decided to return to the Chicago Public Schools to supervise three schools that had been placed on probation. She specifically requested the schools with the worst academic records and lowest parental involvement, and in only half a year improved the rating of two of the three schools by 85 percent. During the following year, the Marva Collins Preparatory School of Wisconsin opened its doors to its first class of students, and other schools have since opened in Cincinnati, Ohio, and Florida. Collins trained more than 100,000 teachers since the opening of the Westside Preparatory School and traveled to Africa with the Young Presidents’ Organization in order to spread her methodology to educators worldwide. She received more than forty honorary degrees and in 1982 was honored as one of the Legendary Women of the World.

See how Marva Collins is related to other HistoryMakers
Donate Now
Click Here To Explore The Archive Today!