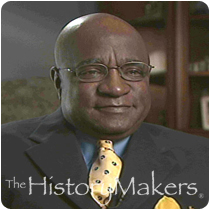 See how Marv Dyson is related to other HistoryMakers
Donate Now

Radio executive Marv Dyson was born November 28, 1937 in Chicago, Illinois to Florence Dyson and Richard Dyson, both of whom were radio announcers. In the early 1940s, Dyson attended McCosh Elementary School in the West Woodlawn neighborhood of Chicago and Parker High School, graduating in 1955.

Dyson attended the College of Emporia in Emporia, Kansas, graduating in 1959. In 1968, Dyson began working for Johnson Publishing Company’s legendary WJPC-FM radio station in Chicago, where he became president and general manager. In the mid-1970s, Dyson discovered radio disc jockey Tom Joyner, who was working in radio in Montgomery, Alabama, and convinced him to work for WJPC-FM, where Joyner would stay until the mid-1980s.

In 1978, Dyson left WJPC and began working for Clear Channel’s WGCI-FM and WVAZ-FM as a sales account executive. He became general manager of the station in 1981, hiring Kevin Wagner, the future founder of Urban Radio Communications, out of high school to be the station’s account executive. Another discovery of Dyson’s was on-air personality Doug Banks, who began his radio show with WGCI-FM in 1986. He also gave comedian Steve Harvey his first break in the radio broadcasting industry.

Dyson was promoted to President of WGCI-FM in 1994 after leading the station to Chicago’s highest audience ratings. In 1998, Dyson received a lifetime achievement award at the third annual March of Dimes Achievement Radio Awards. In 2003, Dyson was honored by Chicago Mayor Richard Daley and the radio community as the Broadcast Advertising Club of Chicago’s Person of the Year. That same year, Dyson retired as general manager of Clear Channel’s urban radio station group after thirty-five years. Dyson was an early investor in Urban Radio Communications, and, in 2005, Goldman Sachs Urban Investment Fund infused $17 million into the company, doubling the group’s properties and making it the second-largest African American-owned radio company in the country. Dyson co-owns thirteen radio stations, and he is the director of operations at Kennedy King College’s radio station, 89.3 WKKC-FM.

Dyson was interviewed by The HistoryMakers on January 20, 2007.

See how Marv Dyson is related to other HistoryMakers
Donate Now
Click Here To Explore The Archive Today!