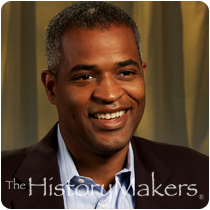 See how Martin Nesbitt is related to other HistoryMakers
Donate Now

Transportation Chief Executive, Presidential Advisor, and City Government Official Martin Nesbitt was born in Columbus, Ohio on November 29, 1962, to Margaret and Martin Nesbitt. He graduated from Columbus Academy High School and went on to receive his B.S. degree from Albion College in 1985. He began working for the General Motors Acceptance Corporation as an analyst and while there qualified for a fellowship from GM to attend the University of Chicago to attain his M.B.A. degree. After he graduated from the University of Chicago, he went to work for LaSalle Partners as an associate. In 1991, he was promoted to vice president of the company. In addition to meeting his future wife during his time at the University of Chicago, Nesbitt became good friends with future President of the United States Barack Obama.

In 1996, while looking for investors in an airport parking company he was hoping to start, he became acquainted with Penny Pritzker of the Pritzker Realty group. She was impressed with Nesbitt, and invited him to become Vice President of her organization. Nesbitt served in that capacity for two years before receiving the funding to found his own airport parking and transportation corporation called The Parking Spot. Nesbitt began serving as president and CEO of the company.

In 2003, Nesbitt was appointed to the Chicago Housing Authority, which had recently come back under the city of Chicago’s control and had begun to implement the Plan for Transformation to completely overhaul the public housing system in Chicago. Three years later, Nesbitt began serving as vice chairman of the CHA and was quickly appointed chairman by Mayor Richard Daley. In 2007, Barack Obama announced his candidacy for president of the United States and Nesbitt became his campaign treasurer. Obama won the election and Nesbitt returned to work for The Parking Spot, although he and Obama have remained in close contact during his presidency.

Nesbitt has been active in the Big Brothers/Sisters of American program and has served as the Chairman of the DuSable District of the Boy Scouts of America. He is also a trustee of the Chicago Museum of Contemporary Art, a member of the University of Chicago Laboratory School Board, and was a member of the United Negro College Fund Advisory Council.

See how Martin Nesbitt is related to other HistoryMakers
Donate Now
Click Here To Explore The Archive Today!