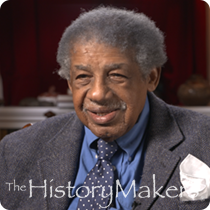 See how Martin Kilson is related to other HistoryMakers

Professor Martin Kilson was born on February 14, 1931 in East Rutherford, New Jersey to Reverend Martin Kilson and Louisa Kilson. After his family’s move to Ambler, Pennsylvania, Kilson attended Ambler High School, graduating from there as an honor student in 1948. He then attended Lincoln University in Pennsylvania, where he studied under then university president Dr. Horace Mann Bond. Graduating as class valedictorian, Kilson received his B.S. degree in political science in 1953, and was awarded a John Hay Whitney Fellowship to study at Harvard University, where he earned his Ph.D. degree in political science in 1959.

After finishing his doctorate degree, Kilson spent eighteen months conducting field research in West Africa under a Ford Foundation Fellowship. He then returned to Harvard as a research associate in the Center for International Affairs, and was appointed lecturer in Harvard’s Department of Government in 1962. As one of only two African American junior faculty members at Harvard, Kilson also served as the faculty advisor for the newly founded Harvard-Radcliffe Afro-American Students Association during the 1960s. In 1966, he published his first book, Political Change in a West African State: A Study of the Modernization Process in Sierra Leone, based on his field research in Sierra Leone. In 1969, Kilson became a full professor of government at Harvard College, making him the first African American professor to gain tenure there. A recipient of the Guggenheim Fellowship in 1975, Kilson was instrumental in the development of African American studies both as an academic discipline and as a department at Harvard University. He was appointed the Frank G. Thomson Professor of Government in 1988, a position he held until his retirement in 1999.

In addition to authoring hundreds of academic articles, Kilson also served as a co-editor of numerous essay collections, including The African Diaspora: Interpretive Essays, which was the first published work to use the term “African diaspora.” He returned to Harvard to deliver the annual W.E.B. DuBois lectures in 2010, and published his book, The Transformation of the African American Intelligentsia, 1880-2012, in 2014.

Martin Kilson was interviewed by The HistoryMakers on October 22, 2016.

See how Martin Kilson is related to other HistoryMakers