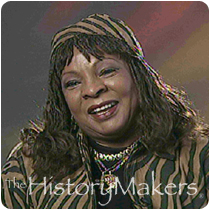 Martha Reeves, the earthy alto voice of Martha and the Vandellas, was born July 18, 1941, in Eufaula, Alabama. The eldest of eleven children, Reeves moved with her parents to Detroit, Michigan, before she was a year old. Reeves attended Russell Elementary School where Emily Wagstaff taught her vocals. A cheerleader who loved composition and music, Reeves studied voice with Abraham Silver at Northeastern High School. She was chosen to sing Bach’s Aria and she competed in talent shows. After graduating in 1959, Reeves worked in sales while performing with Rosalind Ashford and Annette Sterling as the Del-Phis and solo as Martha LaVille.

In 1961, William “Mickey” Stevenson, head of the Artists and Repertoire department for Motown Records, noticed Reeves at Detroit’s Twenty Grand Club. Reeves, along with Ashford and Sterling, sang back up for Marvin Gaye’s hits, “Stubborn Kind of Fellow” and “Hitch Hike” in 1962. In 1963, Berry Gordy signed the three to a recording contract as Martha and the Vandellas. Named by Reeves for Van Dyke Street and Della Reese, her favorite singer, the group’s first hit was “Come and Get These Memories”. The million selling “(Love Is Like A) Heat Wave” led a string of hits, including 1964’s “Dancing in the Streets”, “Nowhere to Run”, “Quicksand”, “My Baby Loves Me”, “I’m Ready for Love” and 1967’s “Jimmy Mack” and “Honey Chile”. Though they toured the United States and Europe to the acclaim of millions, they were the first group released by Motown when the company moved its operation to California in 1971. In 1974, Reeves sang for the film Willie Dynamite. That same year, her solo album for MCA, Martha Reeves, set a record for production costs, but did not match her earlier success.

Performing in 1983’s Motown 25th Anniversary Special and numerous other television shows and concert tours, Reeves is also featured in the film, Standing in the Shadows of Motown. Reeves’ 2004 album is titled Home to You.