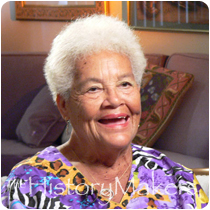 See how Martha Jordan is related to other HistoryMakers
Donate Now

Martha Jordan was born on January 22, 1927, in St. Louis, Missouri. Jordan was adopted as a baby by Dr. Chalmers Weaver, a local dentist and his wife, Eliza. Jordan attended Simmons Elementary School, and because of her love for music, Jordan took tap and ballet classes as well as piano lessons. Jordan then attended Charles H. Sumner High School where she danced in the Y Circus, a type of music revue that featured popular musicians of that time; she graduated in 1943, at age sixteen.

Jordan promised her parents that she would go to college if they allowed her to work at the Plantation Club in St. Louis as a dancer for one year. When that year ended, she did not attend college, and instead went to Chicago with show producer-dancer Hortense Allen Jordan to work at the Rhumboogie Club as a chorus girl. Jordan performed with the chorus line for shows that featured Cab Calloway, Nat King Cole, Duke Ellington, and Pearl Bailey, who was one of her good friends. Jordan appeared in one of the first all African American shows in Las Vegas at the Dunes Hotel: Smart Affairs , produced by Larry Steele.

In the early 1960s, Jordan moved to Los Angeles during the decline in popularity of chorus line shows; there she took a real estate course and received her broker’s license. At this time, Jordan became engaged to music great, Louis Jordan, and they married in 1966. Louis Jordan was famous for his recorded hits, Let the Good Times Roll and Is You Is or Is You Ain’t My Baby. Jordan traveled and sang with the Louis Jordan Band and took care of the finances. Jordan stopped touring in the early 1970s and began working as an office manager for a Santa Monica elementary school. Louis Jordan passed away in 1975, and in 1980, Jordan moved to Las Vegas where she worked for the Las Vegas Metropolitan Police Department as a records technician. She then retired in 1990.

Jordan served as president of the Las Vegas Chapter of Links, Inc.; a member of the Girl Friends, Inc.; and founder and CEO of the Louie Jordan Commemorative Scholarship Foundation.

See how Martha Jordan is related to other HistoryMakers
Donate Now
Click Here To Explore The Archive Today!