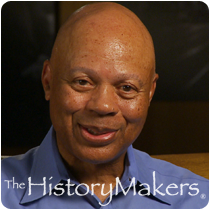 See how Marshall Jones is related to other HistoryMakers

Mechanical engineer and inventor Marshall G. Jones was born on August 1, 1941 in Southampton, New York to Mildred and Dallas Jones. While his father served in the Navy during World War II, Jones and his brother lived with his great aunt and uncle in Aquebogue, New York on their duck farm. Although he had to repeat the fourth grade because of his reading skills, Jones excelled in math and science. Jones attended Riverhead High School and graduated with his diploma in 1960. Two years later, he received his A.A.S. degree from Mohawk Valley Community College. Jones then received his B.S. degree in mechanical engineering from the University of Michigan in 1965. In his graduating class, he was the only African American student in the engineering school. Following work as a development engineer at Brookhaven National Laboratory (BNL), Jones went on to attend the University of Massachusetts at Amherst, where he received his M.S. and Ph.D. degrees in mechanical engineering in 1972 and 1974, respectively.

Jones entered into industrial research in 1974, working with General Electric Global Research in New York. Jones was one of General Electric’s first scientists researching laser material processing and he soon became the manager of the Laser Technology Program. In 1982, Jones started research on high-power laser beam transmission through optical fibers. His research allowed for the passage of high power laser beams with high efficiency. Jones continued to specialize in laser technology, becoming a major pioneer in the field. His work included the use of lasers to join two dissimilar metal combinations together. He received fifty United States patents, thirty-one foreign patents and wrote over 45 publications. Jones served as an adjunct professor at SUNY of Albany and Schenectady County Community College. He is the subject of the children’s book, Never Give up: The Marshall Jones Story .

Jones won a number of awards for his groundbreaking work. He is the recipient of the General Electric Company’s highest honor, the E-GR Coolidge Fellow. Jones was named the 1994 Black Engineer of the Year for his technical contributions to industry. One year later, he received the Distinguished Achievement Award for Professional and Community Service from the University of Massachusetts. Jones went on to receive the Pioneer of the Year Golden Torch Award from the National Society of Black Engineers (NSBE) in 1999. He was also elected into the National Academy of Engineering (NAE) in 2001 for his contributions to the application of high-power lasers in industry. Jones was a fellow of the American Society of Mechanical Engineering (ASME) and the Laser Institute of America (LIA).

Marshall G. Jones was interviewed by The HistoryMakers on August 4, 2012.

See how Marshall Jones is related to other HistoryMakers
Click Here To Explore The Archive Today!