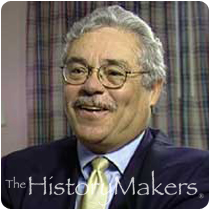 See how Marshall Grigsby is related to other HistoryMakers
Donate Now

Educational adviser Marshall Grigsby was born in Charlotte, North Carolina, on August 18, 1946. After earning his B.A. in political science from Morehouse College in 1968, Grigsby relocated to Chicago, where he pursued a master's of theology and doctorate in ministry from the University of Chicago, completing his program in 1972.

Grigsby began his career after earning his master's in 1970, working as the executive director of the Black Legislative Clearing House, which provided educational and research services to the nation's black legislators. After completing his Ph.D., Grigsby moved to Ohio, where he became the associate director of the Association of Theological Schools of the United States and Canada. In that capacity, he worked with the schools to address the concerns of the minority students of the programs. In 1975, Grigsby was named assistant dean and an associate professor at the Divinity School at Howard University, where he remained for the next ten years. Continuing on in the academic world, Grigsby was named president of Benedict College in 1985, and in 1993 he was appointed to the positions of executive vice president, provost and CEO of Hampton University. After serving only a year at Hampton, Grigsby was summoned to Capitol Hill, where he served as the senior higher education specialist for Democratic members of Congress and as special adviser to Congressman William Clay. Grigsby left in 2001 to form his own company, Grigsby and Associates, an educational policy development consulting firm.

In addition to his consulting work, Grigsby serves on the Board of Trustees of USA Funds, which provides guaranteed loans of more than $10 billion a year to students across the country. He is also a managing consultant with the Council for Opportunity in Education and is the senior scholar with the Claiborne Pell Institute for the Study of Opportunity in Education. Grigsby was one of five college presidents in 1991 to receive the Knight Foundation Presidential Leadership Award. Grigsby and his wife, Harriet, live in Maryland.

See how Marshall Grigsby is related to other HistoryMakers
Donate Now
Click Here To Explore The Archive Today!