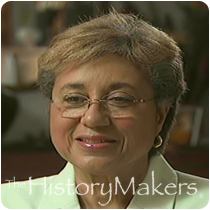 Journalist and Senior Producer at CBS News, Marquita Jones Pool-Eckert was born on February 19, 1945, in Aurora, Illinois, to Jeanne Boger Jones and Mark E. Jones. She received her B.S. degree from Boston University in 1966 and her M.A. degree in journalism from Columbia University in 1969. Pool-Eckert began her career at WABC-TV in New York as producer from 1970 to 1974. From 1974 to 1975, she worked as a producer for WNET/l3 Public TV and moved to CBS News as an associate producer in 1975. Pool-Eckert functioned as a producer there from 1984 to 1990, and became senior producer of Sunday Morning in 1990. She sat on the board of directors of Nzingha Society Incorporated from 1976 to 1989, and served as its president from 1976 to 1985. She has been a member of the New York Association of Black Journalists since 1985; the Women’s Media Group since 1986; and has been on the board of directors of New York Women in Film since 1994. From 1994 until 1998, Pool-Eckert sat on the board of directors of the Frederick Douglas Creative Arts Center. She has been member Council on Foreign Relations and a member of the Friends of New York’s Museum of Modem Art since 1995. She is the Metro-Manhattan chairperson of The Links Incorporated.

Pool-Eckert’s honors and awards include Emmys for producing the segments “The Bombing of Beirut” and “The Vanishing Family - Crisis in Black America” in 1983. Dollars and Sense magazine named her one of the 100 Top Professional Black Women in 1986. She received a National Monitor Award in 1988 and an International Monitor Award for “80s Remembered” in 1990. Norfolk State University presented her with a Career Achievement Award in 1996, and she received a Black Career Women Lifetime Achievement Award in 1997. Pool-Eckert received additional production Emmys for “Racism” in 1986; “Pan Am 103 Crash” in 1988; and “Diana, Princess of Wales,” a CBS Sunday Morning piece, in 1998. She received the Muse Award from New York Women In Film and Television in 1999. Pool-Eckert married Knut Eckert on May 21, 1988.

Pool-Eckert was interviewed by The HistoryMakers on August 29, 2005.

See how Marquita Pool-Eckert is related to other HistoryMakers
Donate Now
Click Here To Explore The Archive Today!