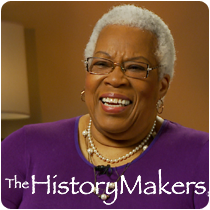 See how Marlene Johnson is related to other HistoryMakers

Newspaper reporter and assistant editor Marlene L. Johnson was born on November 22, 1936 in Rochester, New York and raised by foster parents on a small farm in Avon. At age twelve, she was stricken with polio. Johnson attended Second Baptist Church in Mumford, N.Y. where Reverend Mordecai W. Johnson once was pastor. She graduated from Geneseo Central High School and then received her A.A. degree from the University of Buffalo. Johnson moved to Detroit, Michigan and earned her B.S. degree in secondary education and English from Wayne State University in 1973. She went on to earn her M.S. degree in media instructional systems from the University of the District of Columbia in 1983. In 2007, Johnson graduated from the Howard University School of Divinity with her M.A. degree in religious studies.

Johnson began her career in journalism as a general assignment reporter for the Associated Press in Detroit. She sued the Associated Press in 1973 on behalf of African Americans and women after being terminated without just cause. A court upheld her claims of discrimination and handed down a landmark decision. This ruling was the catalyst for the establishment of a formal training program for minority journalists at the Associated Press. In 1975, Johnson moved to Washington, D.C. to work for The Newspaper Guild. From 1976 to 1992 she was a public relations practitioner for nonprofit organizations including the National Urban League and the National 4-H Council.

Johnson served as the assistant editor of the “Features” and the “Arts & Entertainment” sections of the Washington Times from 1994 until 2004. She covered stories at the Kennedy Center for the Performing Arts, the National Gallery of the Arts, and the Warner Theater. In 2007, Johnson became the executive editor for the online newspapers owned by Redding Communications, Inc., which included the The Washington Continent and the Redding News Review. She left Redding Communications in April of 2008 to pursue personal writing projects. Johnson also has worked for the National Caucus and Center on Black Aged and the National Committee Against Discrimination in Housing. She is an active member in the National Association of Black Journalists and has supervised student reporters for the NABJ Monitor. In addition, Johnson founded Grapevine Communications, a media consulting firm in Washington, D.C.

Johnson received the Excellence of Lifestyle or Entertainment Pages Award from the Virginia Press Association in 1998; and the SPJ Washington Dateline Award for Excellence in local journalism in 2000.

Marlene L. Johnson was interviewed by The HistoryMakers on March 2, 2013.

See how Marlene Johnson is related to other HistoryMakers
Click Here To Explore The Archive Today!