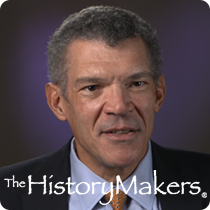 Favorite Color:
Green
Favorite Food:
Soul food, French food.
Favorite Time of Year:
Autumn
Favorite Vacation Spot:
France and Jamaica
Favorite Quote:
Beware of what you want because you might get it.

Favorite Color:
Green
Favorite Food:
Soul food, French food.
Favorite Time of Year:
Autumn
Favorite Vacation Spot:
France and Jamaica
Favorite Quote:
Beware of what you want because you might get it.

See how Mark Whitaker is related to other HistoryMakers

Journalist and author Mark Whitaker was born on September 7, 1957 in Lower Merion, Pennsylvania to Syl and Jeanne Whitaker. After attending the George School in Newtown, Pennsylvania, Whitaker went on to receive his B.A. degree in social studies from Harvard University in 1979, and become a Marshall Scholar at Oxford University’s Balliol College in London, England.

From 1981 to 2006, Whitaker worked as a journalist for Newsweek. In 1987, he was appointed the business editor for the magazine, leading coverage of the stock market crash, insider trading scandals, and the savings and loan crisis. He also wrote the cover story on the release of Nelson Mandela in 1990. Whitaker became the Editor of Newsweek in 1998, making him the first African American to occupy the top editorial position at a national newsweekly. In 2007, he was hired as senior vice president of NBC News. Whitaker became the Washington bureau chief for NBC News after Tim Russert’s death in 2008. In that role, he oversaw the television program Meet the Press, and supervised the coverage of the 2008 presidential election and the first two years of the Obama administration. Whitaker left NBC to become the executive vice president and managing editor for CNN Worldwide, positions he held from 2011 to 2013.

During Whitaker’s tenure as Newsweek editor, the magazine won National Magazine Awards for General Excellence for their coverage of the September 11 attacks and the Iraq War. At NBC and CNN, he oversaw programming that was nominated for News & Documentary Emmy Awards, and won several Peabody Awards. Whitaker served as president of the American Society of Magazine Editors from 2004 to 2006, and he is currently a member of the selection committees for the John Chancellor Award and the Alfred I. duPont-Columbia University Awards in journalism.

Whitaker has written three books: a family memoir entitled My Long Trip Home; Cosby: His Life and Times, a biography on comedian Bill Cosby; and Smoketown: The Untold Story of the Other Great Renaissance, a history of the contribution of black Pittsburgh to the worlds of music, sports, theater, journalism and politics.

Whitaker and his wife, Alexis Gelber, have two children, Rachel and Matthew.

See how Mark Whitaker is related to other HistoryMakers