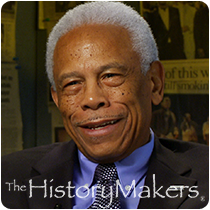 See how Mark Stansbury is related to other HistoryMakers

Gospel radio show host and academic administrator Markhum “Mark” L. Stansbury, Sr. was born on April 5, 1942 in Memphis, Tennessee to Willie and Eliza Markham Stansbury. He graduated from Booker T. Washington High School, where he was editor of the yearbook. In 1960, at age eighteen, Stansbury was hired as a radio personality and gospel announcer at Memphis, Tennessee’s WDIA-AM, where he has worked for over fifty years. He went on to receive his B.A. degree in history from Lane College in Jackson, Tennessee in 1966.

Upon graduation from Lane College, Stansbury was named the school’s public relations director. He then took a job with Holiday Inns, Inc. in 1969 as a community relations manager, where he worked until 1981. From 1983 to 1987, Stansbury was an insurance agent for Union Central Life Insurance Company and American United Insurance Company, and then served as special assistant to the governor of the State of Tennessee from 1987 until 1989. Stansbury was named assistant to the president of the University of Memphis in 1989, and went on to work for four university presidents. In addition, Stansbury has served as vice president of advancement at LeMoyne-Owen College and interim president of Shelby State Community College (now Southwest Tennessee Community College). He was also a regular photographer for the Memphis World and Tri-State Defender, and briefly worked as a reporter and copy editor for The Commercial Appeal.

Stansbury has been affiliated with or served on the boards of Leadership Memphis, E 9-1-1 Emergency Communications District, St. Andrew AME Church, Memphis Race Relations and Diversity Institute, Shelby Farms, YMCA, Goals of Memphis, and the University of Memphis Foundation. He was appointed to the Shelby County Historical Commission, and served as an advisory board member of South Central Bell. He was a NAACP Freedom Fund Gala Coordinator; past president of the Public Relations Society of America-Memphis Chapter; and served on the Steering Committee for the United Negro College Fund. Stansbury was also a founder of Diversity Memphis, an organization which fights to eliminate bigotry.

He is a member of the United Negro College Fund Hall of Fame, and has received the Award of Merit, the highest award presented to a citizen by the Mayor of Memphis. Stansbury was also named Parent of the Year by the Memphis Rotary Club, and was the first person to receive the University of Memphis’ Campus Unity Award in 1993.

Mark Stansbury was interviewed by The HistoryMakers on April 25, 2014.

See how Mark Stansbury is related to other HistoryMakers
Click Here To Explore The Archive Today!